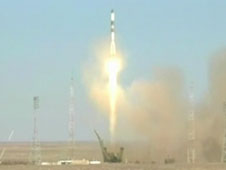 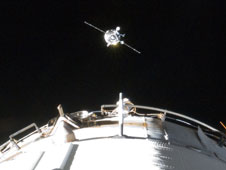 The Expedition 33 crew of the International Space Station welcomed a special Halloween visitor Wednesday in the form of a Russian space freighter loaded with 2.9 tons of cargo.

The ISS Progress 49 cargo craft docked with the aft end of the station’s Zvezda service module at 9:33 a.m. EDT Wednesday following its successful launch from the Baikonur Cosmodrome in Kazakhstan at 3:41 a.m. Progress 49 is delivering 2.9 tons of supplies to the orbiting complex, including 2,050 pounds of propellant, 62 pounds of oxygen, 42 pounds of air, 926 pounds of water and 2,738 pounds of spare parts, experiment hardware and maintenance equipment.

The abbreviated launch-to-rendezvous schedule, first used with the launch of ISS Progress 48 on Aug. 1, is designed to reduce the typical two-day flight between launch and docking. Russian space officials are evaluating this new approach for future Soyuz crew member flights.

Flight Engineers Oleg Novitskiy and Yuri Malenchenko monitored key events during Progress 49’s rendezvous and docking using TORU, the Russian telerobotically operated rendezvous system. The Progress is designed to dock automatically via the Kurs automated rendezvous system, but the crew can use TORU to take over the process if difficulties arise.

On Thursday the crew will conduct leak checks at the docking interface and open the hatch to the resupply vehicle to begin the long process of unloading the cargo. Once emptied, Progress 49 will be filled with trash and station discards and sent to a destructive re-entry in Earth’s atmosphere after undocking in April 2013 for disposal.
› Back To Top