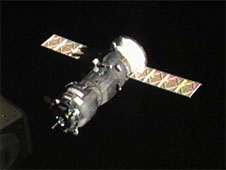 The ISS Progress 48 resupply craft is several meters away from docking to the Pirs docking compartment. Credit: NASA TV

The launch of the 48th Progress resupply vehicle to the International Space Station marked two technical firsts for station operations: it was the first same-day rendezvous and docking of a spacecraft to the station, and it was the first use of a new fuel-efficient way of orienting the station for that docking.

While the two firsts did not depend upon one another, they did occur during the same Russian cargo resupply mission to the station.

The new maneuver profile, developed for NASA by the Draper Laboratory of Cambridge, Mass., required 10 times less fuel to put the station in the proper orientation relative to Earth for the unpiloted cargo vehicle’s arrival.

According to Pooja Jesrani, lead attitude determination and control officer (ADCO) for this expedition at the Mission Control Center in Houston, the new maneuver is called the optimal propellant maneuver, or OPM. OPM is an improvement on the standard zero propellant maneuver, or ZPM, also developed by Draper. The OPM takes into account the need to make the orientation, or attitude, changes to the space station faster than the ZPM. This speed avoids thermal concerns on the exterior of the station’s modules.

“Maneuvers such as the OPM will increase the International Space Station’s efficiency by using less propellant,” Jesrani said. “Additionally, the reduction in thruster firings during an OPM results in the station enduring lower structural loads. These benefits, among others, will help increase the longevity of the station.”

The maneuvers to and from the docking attitude are expected to save more than 90 percent of the fuel typically used when a Russian cargo spacecraft docks with the orbiting outpost.

The OPM uses the U.S. guidance navigation and control system logic to fire thrusters on the “Edoardo Amaldi” Automated Transfer Vehicle (ATV), a European Space Agency-supplied cargo vehicle that docked to the station in March. The Russian segment of the space station's flight software will command the ATV's thrusters to fire, making this maneuver an international effort.

“In the past, we have maneuvered the station from one attitude to another using the most direct route, called an Eigen axis maneuver," said Ken Longacre, the attitude determination and control officer working with Draper on the application of this new maneuvering plan. “For this operation we will be performing a sequence of 55 small maneuvers which will take the station on a less direct route to the new attitude. This new route uses the environmental forces on the station to assist the maneuver, resulting in a significant propellant savings.”

Spacecraft typically use thrusters to maneuver in space and fight against disturbances such as aerodynamic drag and other environmental factors, said Nazareth Bedrossian, Draper’s group leader for vehicle dynamics and control systems. The OPM takes advantage of environmental factors in an approach similar to that used by airline pilots who use tailwinds to save fuel and get passengers to their destinations faster.

The flight tests of ZPM in 2006 and 2007 enabled the space station to rely entirely on its control moment gyroscopes, or CMGs, to perform rotations of 90 and 180 degrees. Those maneuvers took 2-3 hours, but the OPM cuts the time by more than half. The station’s four CMGs, which use huge flywheels spinning at 6,600 revolutions per minute, provide day-to-day control of the station’s orientation as it travels about 240 miles above Earth at 17,500 miles per hour.

Eventually, the OPM could be applied to many of the maneuvers made by satellites operated by NASA, the Pentagon and commercial firms, Bedrossian said, lowering operating costs and extending their lives in orbit.

The International Space Station has been in orbit nearly 12 years and is currently approved to continue operations through 2020. NASA and its international partners are conducting additional engineering evaluations to determine if operations can be extended through 2028.
› Back To Top