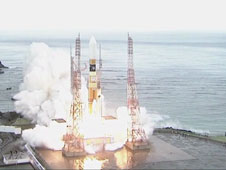 The Japan Aerospace Exploration Agency (JAXA) H-II Transfer Vehicle, or HTV3, launched aboard an H-IIB launch vehicle from the Tanegashima Space Center in southern Japan at 10:06 p.m. EDT Friday (11:06 a.m. Saturday, Japan time) to begin a weeklong journey to the International Space Station. The 16.5-ton HTV3, also known as Kounotori3, or “white stork,” is carrying almost 4 tons of supplies, food and experiment hardware for the orbital outpost. At the time of launch, the station was 255 statute miles over the south Pacific off the coast of Chile.

When Kounotori3 catches up with the station on July 27, the spacecraft will be commanded to fly within about 40 feet while Expedition 32 Flight Engineers Joe Acaba of NASA and Aki Hoshide of JAXA use Canadarm2, the station's Canadian Space Agency-provided robotic arm, to grapple the vehicle and berth it to a docking port on the Earth-facing side of the Harmony node. Grapple is scheduled to begin at 8:04 a.m. The installation process to berth HTV3 to the station begins at 10:45 a.m.

HTV3 is a 33-foot-long, 13-foot-diameter (10 meter by 4 meter) unmanned cargo transfer spacecraft capable of delivering both internal and external supplies and hardware to the station. Among the items being delivered to the station is a remote-controlled Earth-observing camera system called the International Space Station SERVIR Environmental Research and Visualization System, or ISERV. Once installed, the system will be directed by researchers on the ground to acquire imagery of specific areas of the world for disaster analysis and environmental studies.

Other items to be unloaded during HTV3's stay at the orbiting outpost include an aquatic habit experiment, a catalytic reactor for the station’s water regeneration system and a Japanese cooling water recirculation pump. Unpressurized cargo consists of two devices, the Japanese Multi-mission Consolidated Equipment and the NASA Communications, Navigation and Networking re-configurable Testbed, also known as SCAN, or Space Communications and Navigation test bed.

HTV3 will remain at the station until September when, like its predecessors, it will be detached from the Harmony node by Canadarm2 and released for a fiery re-entry over the Pacific Ocean.
› Back To Top