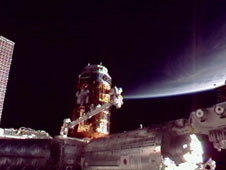 The International Space Station's robotic arm installs the Kounotori3 H-II Transfer Vehicle on its docking port on the Earth-facing side of the Harmony node. Credit: NASA TV

Earlier, working from the robotic workstation inside the station’s cupola, NASA Flight Engineer Joe Acaba, with the assistance of Hoshide, captured the 16.5-ton cargo ship with the station's Canadian Space Agency-provided robotic arm at 8:23 a.m. as the spacecraft flew within about 40 feet of the orbiting complex.

The HTV-3, also known as Kounotori3, whose name means "white stork" because it is emblematic of an important delivery, is a 33-foot-long, 13-foot-diameter unmanned cargo transfer spacecraft capable of delivering both internal and external supplies and hardware to the station.

After equalizing pressures between the cargo craft and the station, the crew is scheduled to open the hatches Saturday and begin the process of removing about 7,000 pounds of supplies from inside the Kounotori3’s Pressurized Logistics Carrier. That cargo includes food and clothing for the astronauts, an aquatic habitat experiment, a remote-controlled Earth-observation camera for environmental studies, a catalytic reactor for the station’s water regeneration system and a Japanese cooling water recirculation pump.

Kounotori3’s Unpressurized Logistics Carrier is carrying more than 1,000 pounds of cargo to be attached to an experiment platform at the end of the Kibo module on August 6.

Kounotori3 launched aboard an H-IIB launch vehicle from the Tanegashima Space Center in southern Japan at 10:06 p.m. EDT July 20 (11:06 a.m. July 21, Japan time). The vehicle will remain at the station until September 6 when, like its predecessors, it will be detached from the Harmony node by Canadarm2 and released for a fiery re-entry over the Pacific Ocean.

› Read more about the HTV-3 launch
› Back To Top