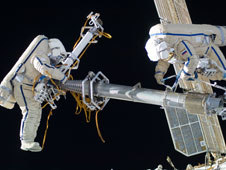 The two spacewalkers moved the Strela-1 crane from the Pirs docking compartment to begin preparing the Pirs for its replacement next year with a new laboratory and docking module. Kononenko and Shkaplerov used another boom, the Strela-2, to move the hand-operated crane to the Poisk module for future assembly and maintenance work. Both telescoping booms extend like fishing rods and are used to move massive components outside the station. This task was originally scheduled during an Expedition 28 spacewalk on Aug. 3, 2011, but was called off due to time constraints.

While Kononenko and Shkaplerov were on the exterior of Poisk, they also installed the Vinoslivost Materials Sample Experiment, which will investigate the influence of space on the mechanical properties of the materials.

The duo also collected a test sample from underneath the insulation on the Zvezda service module to search for any signs of living organisms.

The pair was unable to complete all the originally planned tasks, including the installation of five debris shields on Zvezda. 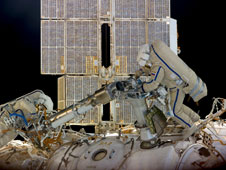 This spacewalk was the 162nd in support of space station assembly and maintenance, totaling 1021 hours, 47 minutes. With two previous spacewalks during Expedition 17 in 2008 under his belt, Kononenko now has a total of 18 hours, 27 minutes of spacewalking time. It was Shkaplerov's first spacewalk and the only one scheduled during Expedition 30.

Because of the location of the activities, Commander Dan Burbank and Flight Engineer Anatoly Ivanishin entered the Poisk module at 7:20 a.m., where they were isolated for the duration of the spacewalk with access to their Soyuz TMA-22 spacecraft in the event of an emergency.

Meanwhile, Flight Engineers Don Pettit and Andre Kuipers, whose Soyuz TMA-03M is docked to the Rassvet module, were free to move about the U.S. segment of the complex.
› Back To Top