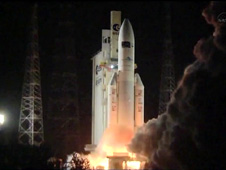 The 13-ton "Edoardo Amaldi" spacecraft, named in honor of the 20th-century Italian physicist who is regarded as one of the fathers of European spaceflight, is delivering 7.2 tons of propellant, water and supplies to the six crew members aboard the orbital laboratory.

› Watch a video of the launch

After launch, ATV-3 separated from the Ariane rocket’s upper stage and was placed into a preliminary orbit.

More than an hour and a half after launch, ATV-3 deployed its solar arrays, which unfolded to generate power from sunlight.

Like its two predecessors that flew to the station in 2008 and 2011, the Edoardo Amaldi will conduct a slow, methodical trek to the complex under the guidance of engineers at the Automated Transfer Vehicle Control Center in Toulouse, France. It will dock automatically to the aft port of the Russian Zvezda service module at 6:32 p.m. on March 28. NASA TV coverage of the docking will begin at 5:45 p.m.

Edoardo Amaldi is expected to remain at the outpost through early September, when it will undock and be commanded to deorbit and burn up upon re-entry into Earth's atmosphere over the Pacific Ocean.