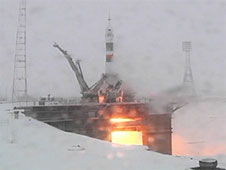 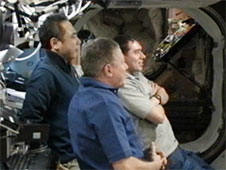 The Soyuz TMA-22 will dock to the Poisk mini-research module at 12:33 a.m. Wednesday. Expedition 29 Commander Mike Fossum and Flight Engineers Satoshi Furukawa and Sergei Volkov will welcome their new crewmates a little while later when they open the hatches about 2:55 a.m. Shkaplerov, Ivanishin and Burbank are scheduled to live and work aboard the orbiting laboratory until March.

NASA astronaut and Flight Engineer Dan Burbank is making his third visit to the International Space Station. His previous two visits were both aboard space shuttle Atlantis. He helped prepare the station for its first crew during STS-106 and helped install the P3/P4 truss during STS-115.

Shkaplerov and Ivanishin, both flight engineers, are beginning their first mission as cosmonauts.

Expedition 29 will end when Fossum, Furukawa and Volkov undock from the Rassvet mini-research module inside the Soyuz TMA-02M Nov. 21. The outgoing trio will land in the steppe of Kazakhstan at 9:25 p.m. (8:25 a.m. Baikonur time Nov. 22).

Expedition 30 will officially begin when the Soyuz TMA-02M undocks. Burbank will take over station command in a ceremony scheduled to take place on Nov. 20.
› Back To Top