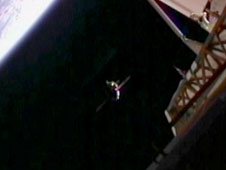 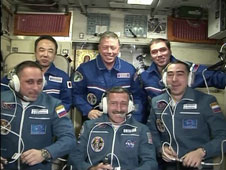 All six Expedition 29 crew members participate in a welcoming ceremony following the opening of the hatches between the Soyuz-TMA-22 and the International Space Station. Credit: NASA TV

After the hatches between Soyuz and station were opened at 2:39 a.m., Expedition 29 Commander Mike Fossum of NASA and Flight Engineers Satoshi Furukawa of the Japan Aerospace Exploration Agency and Russian cosmonaut Sergei Volkov welcomed the new flight engineers aboard for their four-month stay on the orbiting complex.

The six station crew members will have a little less than a week together as the Expedition 29 crew before Fossum, Furukawa and Volkov head home Monday aboard the Soyuz TMA-02M spacecraft that brought them to the station June 9. Their departure will mark the beginning of Expedition 30, under the command of Burbank. A formal change-of-command ceremony is planned for Sunday.

Burbank is making his third visit to the station. His previous two visits were both aboard space shuttle Atlantis. During the STS-106 mission in September 2000, he helped prepare the station for its first permanent crew. During STS-115 in September 2006, he conducted a 7-hour, 11-minute spacewalk that completed truss installation, activated the solar alpha rotary joint and enabled the solar arrays to be deployed.

This is the first spaceflight for both Shkaplerov and Ivanishin.
› Back To Top