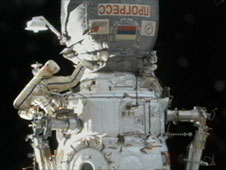 A spacewalker works outside the Russian segment of the International Space Station. Credit: NASA TV 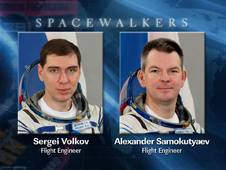 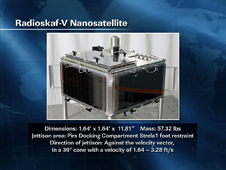 Flight Engineers Sergei Volkov and Alexander Samokutyaev closed the hatch to the Pirs docking compartment ending their spacewalk Wednesday Aug. 3, at 5:13 p.m. EDT. The duo were wearing Russian Orlan spacesuits and worked outside the Russian segment of the International Space Station.

Volkov and Samokutyaev worked for six hours and 23 minutes performing a variety of tasks for both science and maintenance.

Outside the Zvezda service module the spacewalkers installed laser communications equipment. The laser-based system will test the transmission of up to 100 megabytes per second of Russian science data to the ground. Also, an antenna with signs of degraded performance was photographed to assist engineers on the ground searching for a solution to the problem.

The Radioskaf-V, a small satellite containing an amateur radio transmitter and a student experiment, was deployed after ground controllers took time to work on an antenna problem. Operating now at about 50 percent capability, the satellite was originally planned for deployment at the beginning of the spacewalk.

The primary task of the excursion, the relocation of the STRELA-1 cargo boom from the Pirs to the Poisk module, was called off due to time constraints. The cosmonauts would have used another boom, the STRELA-2, to move the hand-operated crane to aid future spacewalkers. Both telescoping booms extend like fishing rods and are used to move massive components outside the station.

An antenna that helped guide the Poisk mini-research module to a docking in November 2009 has been removed and was returned to the station at the end of the spacewalk. That task had been postponed earlier in the spacewalk due to difficulties with the Radioskaf-V and cable connections.

The BIORISK experiment was successfully installed on a handrail outside Pirs. The materials science experiment studies the effect of microbes on spacecraft structures and whether solar activity affects microbial growth. Finally, they took more photographs outside the Russian segment before entering Pirs, closing the hatch and completing the spacewalk.

This was Samokutyaev’s first spacewalk. Volkov completed two spacewalks while he was commander of Expedition 17 in July 2008.

The next Russian spacewalk is planned for February 2012, when the Expedition 30 crew will be in orbit aboard the station.
› Back To Top