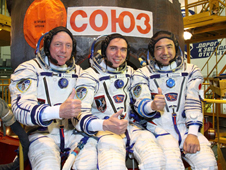 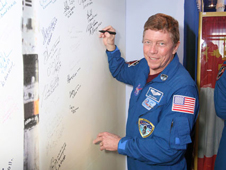 A celebratory toast, an Orthodox Russian priest blessing, and a salute are a few trademarks of a Soyuz launch. This time cheap sunglasses, long beards and an iconic guitar also made their way to the rocket pad.

NASA Astronaut Michael Fossum, now on his way to the International Space Station aboard the Russian Soyuz TMA-02M along with his fellow astronauts and cosmonauts aboard got a sneak preview of a track that is slated to be in part of ZZ Top’s, as yet untitled, forthcoming album.

The sound of music, yet another time-honored trademark of a Soyuz launch, provided temporary entertainment for the crew moments before blastoff. About an hour before the rocket’s first two stages ignited, the crew nestled in their custom-fitted seat liners rocked out inside the descent module of the vehicle poised at the tip of the rocket.

ZZ Top offered a track entitled “Flyin’ High” from the new album, the band’s first studio recording since 2005, to be played in honor of the crew’s loved ones. An excerpt from the song’s lyrics, “Flyin’ high, I’m gonna touch the sky,” resonates with the Soyuz trajectory and docking at the International Space Station.

Fossum grew up in McAllen, Texas, and holds a degree in mechanical engineering from Texas A&M University. The long-bearded, American rock band also from Texas shares the common tie with Fossum in its roots.

Astronaut Fossum is joined on the Soyuz heading to the space station by Russian cosmonaut Sergei Volkov and Satoshi Furukawa of the Japan Aerospace Exploration Agency.