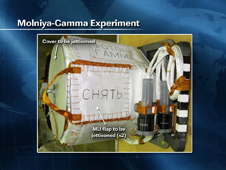 For the second time in less than a month, two Russian cosmonauts ventured outside the International Space Station on Feb. 16 to install a pair of earthquake and lightning sensing experiments and to retrieve a pair of spacecraft material evaluation panels.

Kondratyev again was designated as Extravehicular 1 (EV1), with a red stripe on his suit, and Skripochka was EV2, with a blue stripe on his suit. This time, both cosmonauts wore NASA-provided helmet lights and wireless television cameras to provide live point-of-view video to Mission Control-Moscow, which provided ground support for the spacewalk. Mission Control-Houston monitored the spacewalk as well.

The spacewalk focused on installation of two scientific experiments outside the Zvezda service module. The first is called Radiometria, and is designed to collect information useful in seismic forecasts and earthquake predictions. Radiometria was installed on a portable workstation on the port side of the large-diameter section of the Zvezda module. The second is Molniya-Gamma, which will look at gamma splashes and optical radiation during terrestrial lightning and thunderstorm conditions using three sensors. The Molniya-Gamma was installed on a portable workstation on the starboard side of the Zvezda module. 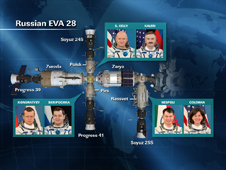 Kondratyev and Skripochka also retrieved two Komplast panels from the exterior of the Zarya module. The panels contain materials exposed to space, and are part of a series of international experiments looking for the best materials to use in building long-duration spacecraft. Additionally, they removed and jettisoned a space suit foot restraint.

As during the previous spacewalk, Commander Scott Kelly and Flight Engineer Alexander Kaleri climbed into their Soyuz 24 spacecraft, which is docked to the Poisk module on the opposite side of Zvezda from the airlock, and sealed the hatches between Zvezda and Poisk. This protected them against the unlikely possibility of a sudden station depressurization and also allowed for the use of the forward portion of Zvezda as a backup airlock if necessary. Flight Engineers Cady Coleman and Paolo Nespoli were in the U.S. segment and had access to their Soyuz 25 spacecraft, which is docked to the Rassvet module adjacent to Pirs on the Zarya control module. Therefore they did not need to be sequestered.

With all tasks complete, Kondratyev and Skripochka re-entered the Pirs airlock and ended their spacewalk at 1:21 p.m.

The next Russian spacewalk is planned for July by Expedition 28 Commander Andrey Borisenko and Flight Engineer Sergei Volkov.

› View spacewalk graphics
› Back To Top