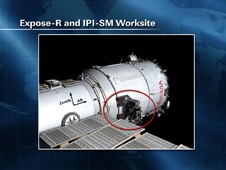 Kondratyev was designated as Extravehicular 1 (EV1), with a red stripe on his suit, and Skripochka is EV2, with a blue stripe on his suit. Skripochka also wore a NASA-provided wireless television camera system and helmet lights to provide live point-of-view video to Mission Control-Moscow, which provided ground support for the spacewalk. Mission Control-Houston monitored the spacewalk as well.

Before the spacewalk began, Commander Scott Kelly and Flight Engineer Alexander Kaleri climbed into their Soyuz 24 spacecraft, which is docked to the Poisk module on the opposite side of Zvezda from the airlock, and sealed the hatches between Zvezda and Poisk. This protected against the unlikely possibility of a sudden station depressurization and also allowed for the use of the forward portion of Zvezda as a backup airlock if necessary. Flight Engineers Cady Coleman and Paolo Nespoli were in the U.S. segment and had access to their Soyuz 25 spacecraft, which is docked to the Rassvet module adjacent to Pirs on the Zarya control module; therefore they did not need to be sequestered.

As a sunrise dawned on the station, Kondratyev and Skripochka opened the Pirs hatch and began exiting the Russian segment of the station. They took with them a spacewalk tool carrier, an antenna and cable reel for the data transmission system, and protective covers for the experiments they were to bring back inside the station. All was temporarily affixed to the Zvezda service module’s exterior for handy access near the respective work sites.

The first job was to deploy the antenna for the Radio Technical System for Information Transfer, an experimental system designed to enable large data files to be downlinked using radio technology at a speed of about 100 megabytes a second from the Russian segment of the station. The system is similar to the NASA system already in use. Later in the spacewalk, the crew also routed external cabling to connect the antenna to patch panels connecting it to the cabling and computer systems already installed inside the station. They also jettisoned the antenna’s hatbox-shaped cover and the cable reel. 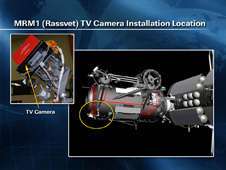 Next, the spacewalkers removed a plasma pulse generator on the port side of Zvezda that was part of an experiment to investigate disturbances and changes in the ionosphere from space station impulse plasma flow. The generator, which failed early on, was covered, removed and returned inside the station. They also removed the commercial Expose-R experiment from the port side of Zvezda. The joint Russian and European Space Agency package contains a number of material samples that were left open to space conditions. They returned both to the Pirs airlock and stowed them there, along with a tool carrier that was needed for the tasks earlier in the spacewalk. The plasma generator eventually will be disposed of in a departing Progress resupply craft, while the Expose-R experiment’s three cassettes will be removed inside the station, sealed and returned to Earth for study on a returning Soyuz.

While in the airlock, they grabbed the new docking camera for the Rassvet module and carried it to the worksite on Rassvet. During Russian spacewalk 26 in November, the crew had trouble installing the camera due to interference with multi-layer insulation adjacent to the camera mount. So, once outside again, Kondratyev and Skripochka used a special cutter to rip the threads on some of the insulation material to allow full access to the camera mount. Once the camera was installed, they mated the camera’s cable to a pre-wired connector that will route the video into the station. The camera isn’t crucial to Soyuz and Progress dockings on Rassvet, but provides additional information and situational awareness for remote-control operations when necessary.

With all tasks complete, Kondratyev and Skripochka re-entered the Pirs airlock and ended their spacewalk at 2:52 p.m.

The duo also will conduct the next Russian spacewalk, planned for Feb. 16. That spacewalk will focus on installation of two more scientific experiments on the Zvezda module. The first is called Radiometria, and is designed to collect information useful in seismic forecasts and earthquake predictions. The second is Molniya-Gamma, which will look at gamma splashes and optical radiation during terrestrial lightning and thunderstorm conditions using three sensors.

They’ll also retrieve two Komplast panels from the exterior of the Zarya module, and deploy a small satellite named ARISSat-1. The panels contain materials exposed to space, and are part of a series of international experiments looking for the best materials to use in building long-duration spacecraft.

They’ll deploy ARISSat-1, the first of a series of educational satellites being developed in a partnership with the Radio Amateur Satellite Corp. (AMSAT), the NASA Office of Education ISS National Lab Project, the Amateur Radio on ISS (ARISS) working group and RSC-Energia. ARISSat satellites can carry up to five student experiments and the data from these experiments will be transmitted to the ground via an amateur radio link. In addition, ARISSat will transmit still frame video Earth views from four onboard cameras, commemorative greetings in native languages from students around the world, and a Morse code tracking beacon. ARISSat also will function as a world-wide space communications utility for use by amateur radio operators.

› View spacewalk graphics
› Back To Top