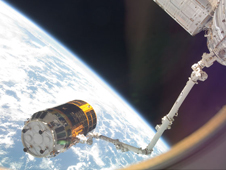 
A quick succession of international space supply trucks will arrive on the International Space Station’s loading docks early in 2011, dropping off more than 11 tons (10,000 kilograms) of food, computers, medical equipment and supplies, spare parts and experiment gear – not to mention the necessities of everyday human life in orbit.

Demonstrating a multinational commitment to supporting life, work and research on the station at the start of its second decade, space trucks from Japan, Europe and Russia will launch to the station in January and February, followed quickly by the space shuttle Discovery.

The Kounotori2, or “white stork,” H-II Transfer Vehicle 2 (HTV2) developed by the Japan Aerospace Exploration Agency (JAXA), will make the system’s second delivery to the station after planned launch from Tanegashima, Japan, on Jan. 22. On its heels will be the 41st Russian Progress vehicle, set to launch from the Baikonur Cosmodrome, Kazakhstan, on Jan. 27 (Jan. 28 Kazakhstan time), and the second European Space Agency’s (ESA) Automated Transfer Vehicle (ATV), Johannes Kepler, set to launch from a launch pad near Kourou, French Guiana, on Feb. 15.

HTV2 is a 33-foot-long, 13-foot-diameter (10 meter by 4 meter) unmanned cargo transfer spacecraft capable of delivering both internal and external supplies and hardware to the station. The HTV will be launched from the Tanegashima Space Center aboard an H-IIB launch vehicle with 4.2 tons (3,814 kilograms) of supplies. When HTV2 approaches the station on Jan. 27, Expedition 26 astronauts Cady Coleman, Scott Kelly and Paolo Nespoli will use the station’s robotic arm, known as “Canadarm2,” to grapple and berth it to the Earth-facing port on the Harmony.

After equalizing pressures between the cargo craft and the station, the crew will open hatches and begin removing supplies ranging from food and clothing for the astronauts to new computers and research equipment and supplies. Among the new research equipment will be the Japanese Kobairo gradient hearing furnace for generating high-quality crystals from melting materials, an Amine Swingbed technology demonstration that will look at ways to revitalize the air on space vehicles, and the International Space Station Agricultural Camera, which will take frequent images, in visible and infrared light, of vegetated areas on the Earth. 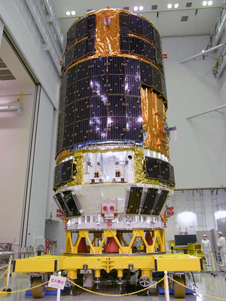 
Aside from the space shuttle, the HTV is the only vehicle capable of delivering external cargo to the station. The cargo is mounted to an exposed pallet that sits within the HTV’s unpressurized section.

Altogether, the HTV2 vehicle and cargo will weigh 35,408 pounds (16,061 kilograms). The total amount of external, unpressurized cargo being delivered is 2,043 pounds (927 kilograms). About 1,990 pounds (902 kilograms) of the external cargo is NASA cargo, and about 53 pounds (24 kilograms) is Canadian Space Agency cargo.

HTV2 will carry two NASA unpressurized cargo items on its unpressurized logistics carrier. This pallet will be transferred from HTV2 to the station using a combination of robotic maneuvers.

The pallet with cargo attached will be removed from HTV2’s external cargo “trunk” by Nespoli and Coleman, operating the Canadian Space Agency-provided Canadarm2 from inside the station’s cupola. Next, Coleman and Kelly will operate Kibo’s robotic arm to accept a handoff of the pallet from Canadarm2, and then install it on the Japanese exposed facility on the end of the Kibo laboratory. Canadarm2 and the Dexterous Manipulator System, or Dextre, operated by flight controllers on the ground in Houston, will be used to remove a Flex Hose Rotary Coupler and Cargo Transport Container from the pallet and temporarily stow them on Dextre. Those items will remain on Dextre until they can be transferred to their final storage locations on External Logistics Carrier 4, which will be installed on the station’s truss during Discovery’s STS-133 mission. The crew will use the Japanese arm to remove the HTV2 external pallet from Kibo’s external facility and hand it back to Canadarm2, which will then return the pallet to HTV2’s external bay.

About three weeks after it is berthed to the Harmony module’s Earth-facing port, HTV2 will be relocated using Canadarm2 to the space-facing port on Harmony. to accommodate activities planned on the space shuttle Discovery’s mission. After Discovery and the STS-133 crew depart, HTV2 will be moved back to the Earth-facing port, which will put it in the proper location for a robotic unberthing. HTV2 is expected to spend about two months berthed to the Harmony module, and will be filled with trash before departing for a fiery re-entry over the Pacific Ocean. 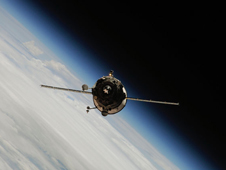 
Just a week after HTV2 launches, the Russian Federal Space Agency will launch the 41st Progress resupply mission to the station. Progress 41 is scheduled to launch from the Baikonur Cosmodrome in Kazakhstan, the same launch pad used to launch crew members to the station.

Progress 41 is scheduled to remain docked to Pirs until late April, when it, too, will undock and be commanded to destruction in the Earth’s atmosphere while carrying trash from the station.

Another cargo craft, Progress 42, will take its place on Pirs about three days after Progress 41 undocks.

When the space shuttle is retired, ESA’s ATV will become the largest and heaviest vehicle supplying the space station. The second of these vehicles is named Johannes Kepler after the German astronomer and mathematician, and is scheduled for launch on Feb. 15. At launch, ATV2 will weigh more than 22 tons (20,000 kilograms), including the spacecraft and its integrated cargo carrier.

ATV serves as a cargo carrier, storage facility and as a ‘”tug” vehicle, capable of having its thrusters fired to adjust station’s orbit. Along with the Columbus laboratory, the versatile spacecraft is one of Europe’s main contributions to the station, which is dependent on regular deliveries of propellants and experimental equipment, as well as food, air and water for the astronauts. The ATV can carry almost three times the amount of fuel as its Russian counterpart, the Progress. 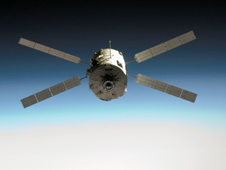 ATV2 is about the size of a traditional London double-decker bus, with a total length of 32.13 feet (9.8 meters) and a diameter of 14.7 feet (4.5 meters). It is equipped with four solar arrays, capable of generating 4,800 watts of electricity, four main engines and 20 smaller thrusters for attitude control. It uses a Russian-made docking system.

After docking to the station, ATV2 is scheduled to spend more than three months in orbit, providing ample time for the Expedition 26 and 27 crews to unload and take advantage of Johannes Kepler’s cargo and resupply capabilities. At the end of that period, it will be commanded to undock and re-enter the atmosphere, carrying a load of trash as it burns up during its descent.

If all launches occur on schedule, February will mark the first and only time that all of the currently available visiting vehicles – space shuttle, Soyuz, Progress, ATV and HTV – will be connected to the station.

At least two more NASA space shuttle missions already are scheduled to deliver additional resources for the crew and research aboard the station, and a new instrument that will help assess the amount of dark matter in the universe, the Alpha Magnetic Spectrometer. A third and final shuttle mission is being planned, subject to final approval and funding by Congress and the Administration.

And the International Space Station Program is looking forward to the start of commercial resupply missions to the station by Commercial Resupply Service contractors SpaceX and Orbital. These systems are preparing for their initial demonstration missions, and are expected to begin adding to the “logistics chain” of the station by the end of 2011.