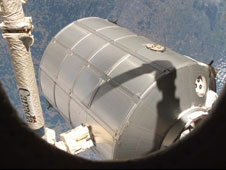 The new Permanent Multipurpose Module (PMM) Leonardo should know its way around the International Space Station by now. This flight marks its eighth and final visit to the orbiting laboratory, its new home.

Leonardo was one of three Multipurpose Logistics Modules built by the Italian Space Agency under contract. It was delivered to Kennedy Space Center in 1998.

Just over five months later, it was on its way to the station again on Discovery, this time on STS-105 launched Aug. 10, 2001. Its cargo included two science racks for the U.S. laboratory Destiny, six resupply stowage racks and four resupply stowage platforms. Total cargo weight was about 6,775 pounds.

On June 5, 2002, it launched on STS-111, this time in Endeavour’s payload bay. Leonardo brought a total of 8,062 pounds of supplies and equipment to the station, including a new science rack to house microgravity experiments and a glovebox for experiments that require isolation. In addition to carrying home the results of several science experiments, Leonardo returned to Earth more than 4,000 pounds of equipment and supplies no longer needed aboard the station. 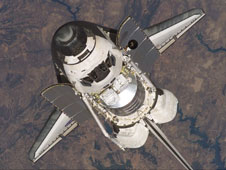 After a shuttle stand-down after the loss of Columbia, Leonardo found itself back in Discovery’s cargo bay for STS-121, launched July 4, 2006. It carried food, clothing and consumables on five resupply stowage racks and three resupply stowage platforms. Also aboard was a minus 80 lab freezer, a European Modular Cultivation System for biology experiments, the Oxygen Generation System and a new cycle ergometer.

STS-126, an almost 16-day flight by Endeavour launched Nov. 14, 2008, marked Leonardo’s next visit to the station. It carried a record 14,000 pounds of equipment and supplies for the ISS. Major cargo included two crew quarters racks, the Advanced Resistive Exercise Device, two water reclamation racks, a waste and hygiene compartment and a galley.

Leonardo’s final flight as an MPLM was aboard Discovery on STS-131, launched April 5, 2010. Its cargo included the third minus 80-degree freezer, a window orbital research facility, a crew quarters rack, a resistive exercise rack and resupply stowage racks and platforms.

Two additional MPLMs were built by the Italian Space Agency. The second, Raffaello, flew three missions to the station and is scheduled to fly again on STS-135. The third, Donatello, never flew in space.

On STS-133, again on Discovery, Leonardo will be attached to the station as the PMM. Modifications before this flight included enhanced shielding and modifications to allow station crew members access to its internal equipment.