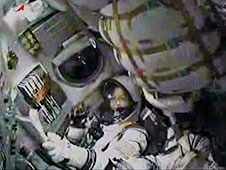 Expedition 26 Flight Engineer Catherine Coleman is seated in the Soyuz TMA-20 during its ascent to orbit. Coleman and Flight Engineers Dmitry Kondratyev and Paolo Nespoli (both out of frame) launched on time to the International Space Station. Credit: NASA TV

A new trio of Expedition 26 flight engineers blasted off Wednesday, Dec. 15, 2010, from the Baikonur Cosmodrome in Kazakhstan at 2:09 p.m. EST (1:09 a.m. Thursday, Baikonur time). Dmitry Kondratyev, Catherine Coleman and Paolo Nespoli are onboard the Soyuz TMA-20 spacecraft and headed for a docking with the International Space Station.

They will dock to the station’s Rassvet mini-research module Friday afternoon. After hatch opening the crew will participate in a traditional greeting ceremony, talk to family and officials on the ground then be briefed on station safety procedures.

The current station residents, Commander Scott Kelly and Flight Engineers Alexander Kaleri and Oleg Skripochka, have been living and working on the space station since Oct. 9. They are scheduled to end their stay in March when they land in Kazakhstan aboard the Soyuz TMA-01M vehicle.

The three new Expedition 26 crew members will officially become the Expedition 27 crew when Kelly, Kaleri and Skripochka undock and return home. Kondratyev, Coleman and Nespoli are scheduled to complete their stay in May.

Kondratyev, Coleman and Nespoli stayed at the Cosmonaut Hotel in Baikonur for two weeks undergoing final launch preparations. Before arriving in Baikonur they were in Star City completing training, participating in official ceremonies and conducting meetings with Russian space officials.

The next set of visitors to the orbiting laboratory will arrive at the station aboard space shuttle Discovery. The STS-133 crew will deliver and install a logistics carrier and a new storage module.
› Back To Top