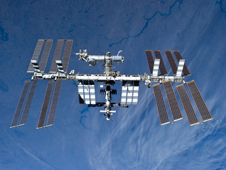 Image above: The International Space Station is featured in this image photographed by an STS-131 crew member on space shuttle Discovery. Credit: NASA

For most of the last decade, as astronauts and cosmonauts orbited the Earth aboard the International Space Station they were circling the globe at an altitude of approximately 220 statute miles, or about 350 kilometers.

When the European Space Agency’s resupply ship Johannes Kepler, known also as Automated Transfer Vehicle 2 (ATV2) arrives at the space station later this month, it will bring the fuel needed to boost the station to its normal planned altitude of 248 miles, or 400 kilometers.

The main benefit of raising the station’s altitude will be to cut the amount of fuel needed to keep it there by more than half.

“The key reason for moving to the higher altitude is to save propellant over the long term as we protect against increased solar activity, said Bill Spetch, of the space station program’s Systems Engineering, Analysis and Integration Office. “As solar activity rises, the atmospheric density in our altitude range increases causing increased drag on the vehicle. This in turn causes us to have to raise the orbit more often.”

Even though the space station orbits in what most people on Earth would consider to be the “vacuum of space,” there still are enough atmospheric molecules that contact the surfaces of its large solar array panels, truss structure backbone and pressurized modules to change its speed, or velocity, which is about 17,500 miles, or 28,000 kiliometers an hour. The station is so large (as big as a football field with the end zones included) that the cumulative effect of these tiny particles contacting its surfaces reduces its speed and causes a minute but continuous lowering of its altitude, or height above the Earth.

To fight this tendency, thrusters on the space station or visiting vehicles such as the space shuttle, Progress resupply vehicles or ATVs are fired periodically to “reboost” the station. These reboosts, however, come at the cost of fuel, or propellant, that must be launched from Earth at significant cost.

“The higher we fly, the less we have to reboost to maintain the orbit,” Spetch explained.

Raising the space station’s altitude means that visiting vehicles will not be able to carry as much cargo as they could if they were launching to the station at a lower altitude, but it also means that not as much of that cargo needs to be propellant.

Other considerations include the amount of orbital debris, or space junk, at these different altitudes, and the amount of solar and cosmic radiation to which astronauts and cosmonauts are exposed.

Crew exposure to radiation can be a long-term health issue for crew members, a subject that doctors and researchers are learning more about as each crew member lives and works aboard the station and increases the pool of information on this important topic for future space exploration beyond low-Earth orbit, where it will be an even bigger concern since Earth is protected from much of this cosmic radiation by the Van Allen Belts, which are outside the station’s orbit.

“What we are balancing against this increase in altitude is vehicle capabilities to get to that altitude, how much cargo they can deliver, crew radiation exposure and orbital debris risk,” Spetch said. “Essentially, we want to fly as low as we can support from a propellant resupply standpoint and that altitude increases with solar cycle activity. Also key to us being so low now was taking full advantage of the cargo delivered by space shuttles. Otherwise we would be flying slightly higher now.”

At its current altitude, the space station uses about 19,000 pounds of propellant a year to maintain a consistent orbit. At the new, slightly higher altitude, the station is expected to expend about 8,000 pounds of propellant a year. And that will translate to a significant amount of food, water, clothing, research instruments and samples, and spare parts that can be flown on the cargo vehicles that will keep the station operational until 2020 and beyond.

And all that will be made possible by the nearly 10,000 pounds (4,500 kilograms) of propellant that will be used by the Johannes Kepler’s thrusters to boost the space station to its new, normal altitude above the Earth. The reboosts will take place over the course of several months while ATV2 is docked to the aft port of the station’s Zvezda service module. Undocking is planned for early June.