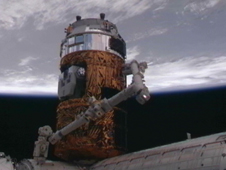 Image above: The Kounotori2 H-II Transfer Vehicle (HTV2) is attached to the Harmony module by the station’s robotic arm Credit: NASA TV

In the coming days, a pallet loaded with spare station parts will be extracted from a slot in the cargo ship and attached to an experiment platform outside the Japanese Kibo module. Other cargo will be transferred internally to the station.

The cargo vehicle will be filled with trash, detached from the station and sent to burn up in the Earth's atmosphere at the end of March.

› Watch video of the HTV2 launch
› Read more about HTV2