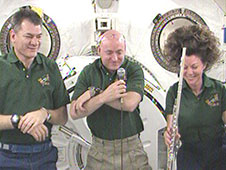 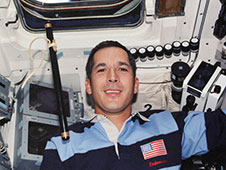 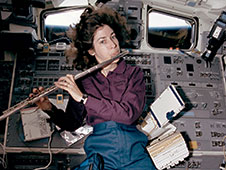 Astronaut Cady Coleman took time during an interview with reporters to play her flute onboard the International Space Station.

"I play the flute on the ground and it’s one of the things I love to do," said Coleman during an interview with National Public Radio. "One of the things that I think is important to do is to try to share how amazing it is up here. I relate to flute players and I just wanted them to understand what a cool place it was and how many possibilities there were to play music up here on the space station."

› Cady playing a flute just days before launching to the station

Coleman brought with her to the station four flute-like instruments in her small allotment of personal items. The collection includes two items from the traditional Irish music group The Chieftains - a penny whistle, which is similar to a recorder, from group-leader Paddy Moloney and a very old Irish flute from Matt Molloy. There is also a flute from Ian Anderson of Jethro Tull and her own personal flute aboard.

"It is really different to play up here," Coleman added. "I’ve been having the nicest time up in our Cupola. I float around in there. A lot of the times I play with my eyes closed."

During the NPR interview she played Bluenose by Stan Rogers on her personal flute. She also played a tune for the following interview with Houston’s KHOU-TV.

Other astronauts have flown flutes in space aboard the space shuttle. Ellen Ochoa, who is a classical flutist, brought her flute on STS-56 in 1993 and took a moment to play it during an educational event. John Herrington, who was the first tribal registered Native American astronaut, brought a wooden flute with him on STS-113 in 2002. The flute was hand-carved by a member of the Kennedy Space Center Native American Intertribal Council.