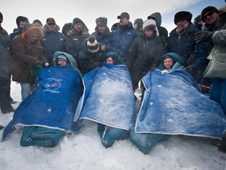 Russian recovery teams were on hand to help the crew members exit the Soyuz vehicle and adjust to gravity after their extended stay on the International Space Station. As members of the Expedition 25 and 26 crews, they spent 159 days in space, 157 of them aboard the station. Kelly has logged more than 180 days in space and Kaleri has more than 770. This was Skripochka’s first space mission.

They launched aboard their Soyuz spacecraft from the Baikonur Cosmodrome in Kazakhstan on Oct. 7 and docked to the Poisk module on Oct. 9. During their mission, they worked on more than 150 microgravity experiments in human research; biology and biotechnology; physical and materials sciences; technology development; and Earth and space sciences. They also welcomed a succession of international space vehicles that delivered more than 11 tons of supplies to the station: the Japanese Kounotori2, or "white stork," H-II Transfer Vehicle 2; the Russian cargo ships Progress 40 and Progress 41; the European Jules Verne Automated Transfer Vehicle; and space shuttle Discovery.
› Back To Top