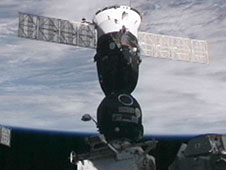 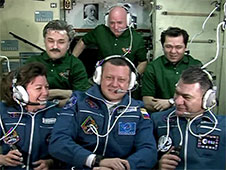 They launched Wednesday on the Soyuz TMA-20 spacecraft from Baikonur Cosmodrome, Kazakhstan at 2:09 p.m. EST (1:09 a.m. Thursday, Baikonur time). After a two-day ride to the orbiting laboratory the new flight engineers began a five-month stay until May 2011.

The new trio joins Commander Scott Kelly and Flight Engineers Alexander Kaleri and Oleg Skripochka who have been living and working on the space station since Oct. 9. The veteran station occupants are scheduled to end their stay in March.

As they waited for their new crew mates, the current station residents kept busy with science, maintenance and other tasks.

Kaleri and Skripochka participated in a couple of Russian experiments. One experiment was designed to detect pressure leaks to improve spacecraft safety. Another experiment observed how crew members physically and mentally adapt to long duration missions in microgravity.

The two cosmonauts also inspected filters and windows in the Russian segment of the station.

Expedition 27 will officially begin when Kelly, Kaleri and Skripochka undock from the Poisk mini-research module in the Soyuz TMA-01M vehicle and land in Kazakhstan in March. At that time Kondratyev will become commander of Expedition 27 as he, Coleman and Nespoli await three new crew members who will join them in March.
› Back To Top