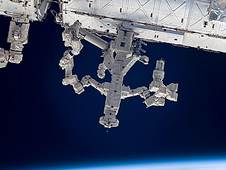 Image above: The Canadian-built Dextre, also known as the Special Purpose Dextrous Manipulator, is photographed by a crew member during the STS-124 mission's second planned spacewalk. Credit: NASA

After Expedition 26 Commander Scott Kelly and Flight Engineers Paolo Nespoli and Cady Coleman completed a handoff of the pallet containing the two items using both Canadarm2 and the Kibo laboratory’s Japanese robotic arm, robotics controllers at NASA’s Johnson Space Center in Houston remotely dispatched Dextre to pluck the two items from their delivery pallet while the crew slept, supported by engineering teams at the Canadian Space Agency’s headquarters in Saint-Hubert, Quebec.

While riding on the end of Canadarm2, Dextre began by unbolting a spare Flex Hose Rotary Coupler (part of the station’s cooling system) and placing it on his workbench, also known by the technical term, the Enhanced Orbital Replacement Unit Temporary Platform. Next, Dextre unfastened the Cargo Transfer Container, which will remain in the robot’s specialized “hands” until the Express Logistics Carrier 4 stowage platform can be installed on the Station during the upcoming STS-133 mission of the space shuttle Discovery.

The operations marked Dextre’s first scheduled task since the robot passed its final exam in December 2010. Canadarm2 will return Dextre to its Payload Data and Grapple Fixture perch on the station’s Destiny laboratory later this evening. While "hanging out" on Destiny, Dextre will provide both payloads with power connections to keep them alive in the harsh conditions of space.

"Having ground-based flight controllers perform these tasks while the crew sleeps helps enhance our productivity," said Tim Braithwaite, Canada’s space representative in Houston. "The on-board crew's valuable time can therefore be saved for science and research instead of time-intensive maintenance spacewalks or robotics."

Dextre’s work capped an intensive week of robotics on the station, with all three components of the Mobile Servicing System working together in a new role that will become increasingly frequent for the Canadian robotics suite. Since it was first installed on the station in 2001, the heavy-lifting Canadarm2 has played a critical role in the assembly of the station by literally piecing together the station’s major components one by one. However, with the orbiting outpost nearing completion, the chief role of the robotic arm will change significantly from building to supporting its maintenance and upkeep. This includes catching free-flying spaceships (like the capture of Kounotori2 on Jan. 27), and soon, visiting commercial vehicles like SpaceX’s Dragon and Orbital’s Cygnus capsules. 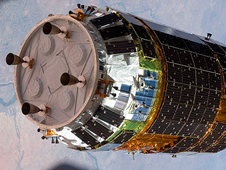 "There were a few times tonight when Dextre’s human operators had to recalibrate as we zeroed in on our target," Braithwaite said about the overnight operations in Houston. "This seems to be the result of the structure itself flexing, effectively making a moving target for the operator to grasp. It’s a bit like standing on the end of a dive board at the pool, and using a long skimmer to scoop a tennis ball that keeps bouncing about in choppy water.

"We know from our early checkout sessions that Dextre’s arms are stable and precisely controllable; however, when the target is literally drifting before the camera, it makes a unique challenge for our operators," Braithwaite explained. "Tonight, though, the team put their experience to good use, and Dextre went on to deliver a flawless performance."

Meanwhile, the Expedition 26 crew is ahead of schedule moving items from inside Konotouri2’s pressurized cargo compartment into the station. Later this month, they will guide Canadarm2 to relocate the cargo craft from the Earth-facing port of the Harmony module to its space-facing port to avoid interference with Discovery’s mission activities. After the shuttle departs, Canadarm2 will be used to move Konotouri2 back to the Earth-facing port so that it will be in the right position for unberthing and departure at the end of March.

› Read more about Kounotori2.
› Back To Top