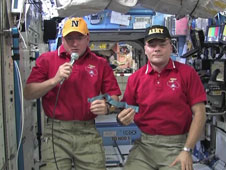 This Veterans Day, one veteran's ultimate sacrifice, which was recognized with the highest honor the United States can give, is being honored in the highest place veterans serve -- aboard the International Space Station.

International Space Station Expedition 25 Commander Doug Wheelock (Col., U.S. Army) and Flight Engineer Scott Kelly (Capt., U.S. Navy) paid tribute to United States service men and women around the world in a Veterans Day message recently. In particular, they honored Sgt. Lester R. Stone Jr. who died on March 3, 1969, in Vietnam. Wheelock brought Stone's Medal of Honor with him to the International Space Station. Stone was awarded posthumously for his heroic actions. In addition to both having served in the U.S. Army, Wheelock and Stone were both born in Binghamton, N.Y.

During a televised message, Wheelock and Kelly displayed the sergeant's Medal of Honor.

“We are carrying it as a tribute to all of those who have served and all of those who love freedom,” said Wheelock. “We wanted to say a huge thank you to our veterans from outer space, from the crew of the International Space Station,” he added.

According to his official Medal of Honor citation, Stone distinguished himself while serving as squad leader of the 1st Platoon. The platoon came under intense fire from a well concealed company-size force of North Vietnamese regulars. Observing the platoon machine gunner fall critically wounded, Stone remained in the exposed area and provided cover fire for the wounded soldier while he was pulled to safety. With enemy fire all around him, Stone had a malfunction in the machine gun, preventing him from firing the weapon automatically. Displaying extraordinary courage under the most adverse conditions, Stone repaired the weapon and continued to provide effective suppressive fire that enabled the rescue to be completed. In a desperate attempt to overrun his position, an enemy force left its cover and charged Stone. Disregarding the danger involved, Stone rose to his knees and began firing at the enemy, killing six before falling mortally wounded. His actions of unsurpassed valor were a source of inspiration to his entire unit, and he was responsible for saving the lives of a number of his fellow soldiers.

Following the completion of his mission, Wheelock plans to return the Medal of Honor to Sgt. Stone’s mother.

“We make a lot of sacrifices living onboard the International Space Station for months on end,” said Kelly, who will command Expedition 26 after Wheelock’s departure from the station. “But those sacrifices pale in comparison to the sacrifices men and women around the globe from all of our armed services have made in this last ten years specifically, but even more so during the entire history of our country,” he added.

The President of the United States, in the name of Congress, awards the Medal of Honor. To be eligible, a person who, while a member of the Army, must distinguish himself or herself by going above and beyond the call of duty, even at the risk of his or her life while engaged in action against an enemy of the U.S. or its ally. The deed performed must have been one of personal bravery or self-sacrifice so great as to clearly distinguish the individual above his or her comrades.

Wheelock received his commission as a Second Lieutenant in the Army Infantry from West Point in May 1983. He entered flight school in 1984 and graduated at the top of his flight class. He was selected as an astronaut in 1998.

Kelly received his commission from the State University of New York Maritime College in May 1987 and was designated a naval aviator in July 1989 at Naval Air Station (NAS) Beeville, Texas. Kelly was the first pilot to fly an F-14 with an experimental digital flight control system installed and performed subsequent high angle of attack and departure testing. He was selected as an astronaut in 1996.