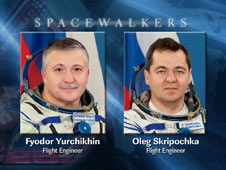 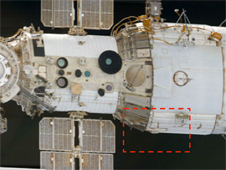 Image above: Location for the installation of a multipurpose workstation on the starboard side of the Zvezda service module. Credit: Russian Federal Space Agency 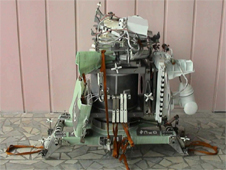 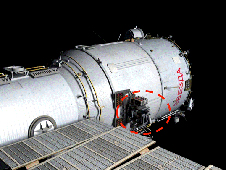 Image above: Location of Kontur experiment on side of the Zvezda service module. Credit: Russian Federal Space Agency

Two Russian cosmonauts floated outside one of the International Space Station’s hatchways on Monday, Nov. 15, to perform a grab bag of spacewalking tasks that outfit the Russian segment for future assembly work and support external experiments.

Monday’s spacewalk was the fifth for Yurchikhin, who wore the spacesuit marked with red stripes and the first for Skripochka, who wore the suit with blue stripes.

The primary assembly and maintenance objectives of the spacewalk were to install a multipurpose workstation on the starboard side of the Zvezda service module’s large-diameter section and relocate a television camera from one end of the Rassvet docking compartment to the other.

Research objectives included cleaning and removing a robotics experiment known as Kontur, short for Development of a System of Supervisory Control Over the Internet of the Robotic Manipulator in the Russian Segment of ISS, from the port side of Zvezda into the Pirs airlock; installing a new materials experiment on a handrail on the Rassvet module, and collecting samples from underneath insulation on the exterior of Zvezda and Pirs.

Skripochka and Yurchikhin completed all the tasks except the relocation of the television camera due to interference with insulation where it was to be installed.

While Yurchikhin and Skripochka were outside the station, their colleagues were ready for departure in the unlikely event of an emergency. Commander Doug Wheelock and Flight Engineer Shannon Walker were in the station's U.S. Operating Segment, with ready access to the Soyuz TMA-19 spacecraft docked to the Rassvet module, while Flight Engineers Scott Kelly and Alexander Kaleri were in the Soyuz TMA-O1M spacecraft docked to the Poisk module.

Flight controllers in the Mission Control Center in Korolev, outside of Moscow, provided primary support for the spacewalk, but coordinated activities with their colleagues in Mission Control, Houston.