Grow Text SizeShrink Text Size
Where Over the World is Commander Scott Kelly? 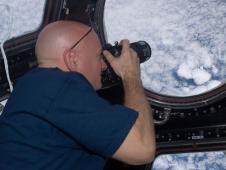 Image above: NASA astronaut Scott Kelly, Expedition 26 commander, uses a still camera to photograph the topography of a point on Earth from a window in the Cupola of the International Space Station. Credit: NASA 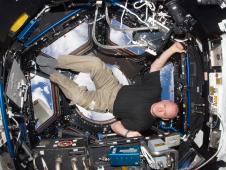 Image above: NASA astronaut Scott Kelly, Expedition 26 commander, is pictured in the Cupola of the International Space Station. Credit: NASA

Geography Trivia from Space: Tweet to Test Your Global IQ.

Commander Scott Kelly is living off the planet aboard the International Space Station for a period of nearly six months. Traveling the world more than 230 miles above Earth and at 17,500 mph, he circumnavigates the globe more than a dozen times a day. During his stay on station, he will have opportunities to see and photograph various geographical locations on Earth from space. In fact, part of his job while in space will be to capture a kaleidoscope of geographical spots for Earth scientific observations.

Through these snapshots, Commander Kelly will share his view from space and also engage the public by way of a virtual journey around the world via a geography trivia game on Twitter.

How to play: Users follow @StationCDRKelly, who will tweet from space a photo during the Expedition 25/26 flight. The first person to @reply to @StationCDRKelly with the correct answer wins. Use the hashtag #spacegeo after your reply and to follow the geography game on Twitter from space. Players are competing to be the first to name that inkblot of Earth from space to win a printed photo of the shot taken from space and autographed by astronaut Kelly after his return to Earth. At the end of each week, the trivia photo will be posted to nasa.gov along with the winner’s name.

In the meantime, you can take your own “virtual” photo of the Earth below the station’s current position at: