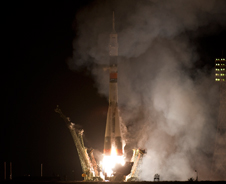 Image above: The Soyuz TMA-01M launches from the Baikonur Cosmodrome in Kazakhstan. Photo credit: NASA/Carla Cioffi

Less than 10 minutes after launch, their spacecraft reached orbit and its antennas and solar arrays were deployed.

The trio will dock to the Poisk module Saturday at 8:02 p.m. completing the Expedition 25 crew. Kelly, Skripochka and Kaleri will begin a five-month tour of duty aboard the orbiting laboratory.