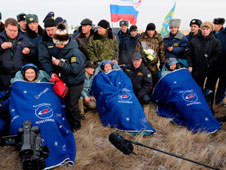 Image above: Soyuz TMA-19 crew members are seen after being removed from the Soyuz capsule near the town of Arkalyk, Kazakhstan. Credit: NASA/Bill Ingalls

Russian cosmonaut Yurchikhin, the Soyuz commander, was at the controls of the spacecraft as it undocked at 8:23 p.m. EST from the station's Rassvet module. The trio landed at 11:46 p.m. (10:46 a.m. on Nov. 26 local time) at a site northeast of the town of Arkalyk.

Working in frigid temperatures, Russian recovery teams were on hand within minutes to help the crew exit the Soyuz vehicle and re-adjust to gravity.

The trio launched aboard the Soyuz TMA-19 spacecraft from the Baikonur Cosmodrome in Kazakhstan on June 15. As members of the Expedition 24 and 25 crews, they spent 163 days in space, 161 of them aboard the station, and celebrated the 10th anniversary of continuous human life, work and research by international crews aboard the station on Nov. 2.

During their mission, the Expedition 24 and 25 crew members worked on more than 120 microgravity experiments in human research; biology and biotechnology; physical and materials sciences; technology development; and Earth and space sciences.

The astronauts also responded to an emergency shutdown of half of the station's external cooling system and supported three unplanned spacewalks by Wheelock and Expedition 24 Flight Engineer Tracy Caldwell Dyson to replace the faulty pump module that caused the shutdown. Their efforts restored the station's critical cooling system to full function.

The station is occupied by Expedition 26 Commander Scott Kelly and Flight Engineers Alexander Kaleri and Oleg Skripochka of the Russian Federal Space Agency. Their increment officially began when the Soyuz TMA-19 undocked.

After a busy week capped with the undocking activities Thursday, Kelly, Kaleri and Skripochka caught up on their sleep Friday. They will enjoy an off-duty weekend of routine station maintenance and daily exercise before kicking off their first workweek as a three-person crew Monday.

A new trio of Expedition 26 flight engineers, NASA astronaut Catherine Coleman, Russian cosmonaut Dmitry Kondratyev and Paolo Nespoli of the European Space Agency, will launch from the Baikonur Cosmodrome on Dec. 15. They will dock with the station and join its crew on Dec. 17.
› Back To Top