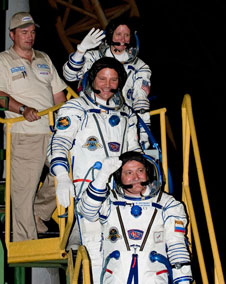 The Expedition 24 crew members (from top to bottom) -- Shannon Walker, Doug Wheelock and Soyuz commander Fyodor Yurchikhin -- wave farewell from the bottom of the Soyuz rocket at the Baikonur Cosmodrome in Kazakhstan, prior to launch. Credit: NASA/Carla Cioffi

As the launch of the Soyuz TMA-19 lit up the pre-dawn skies around the Baikonur Cosmodrome in Kazakhstan, NASA astronauts Doug Wheelock and Shannon Walker and Russian cosmonaut Fyodor Yurchikhin began the two-day journey to catch up with the space station currently orbiting 220 statute miles above the Earth.

The station’s newest flight engineers will begin a five-and-a-half month tour of duty after docking with the station’s Zvezda service module at 6:25 p.m. Thursday. Fellow Expedition 24 crewmates Commander Alexander Skvortsov and Flight Engineers Mikhail Kornienko and Tracy Caldwell Dyson will welcome them aboard the orbiting complex when the hatches open around 9:25 p.m.

During Expedition 24, the six-person crew will continue scientific research investigations and station maintenance activities. On June 28, Yurchikhin, Wheelock and Walker will climb back into their Soyuz spacecraft and move it to the newly-delivered Mini-Research Module-1, or Rassvet.

The mission also includes three spacewalks, one conducted by Russian cosmonauts Yurchikhin and Kornienko on July 26 and two by NASA astronauts Wheelock and Caldwell Dyson on Aug. 5 and 17.

In September Wheelock, Walker and Yurchikhin will become the Expedition 25 crew when Skvortsov, Kornienko and Caldwell Dyson return home in the Soyuz TMA-18 spacecraft that brought them to the station April 4. 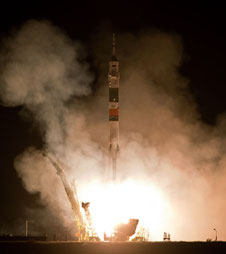 U.S. Army Col. Wheelock, 50, is making his second trip into space. As an STS-120 mission specialist aboard space shuttle Discovery in 2007, he traveled to the station and conducted three spacewalks.

Walker, 45, is a graduate of Rice University and the first native Houstonian to be named an astronaut. This is her first spaceflight.