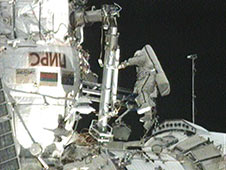 Flight Engineers Fyodor Yurchikhin and Mikhail Kornienko concluded a six-hour, 42-minute spacewalk at 6:53 a.m. EDT on Tuesday, July 27. The cosmonauts began their spacewalk when they opened the hatches of the Pirs docking compartment at 12:11 a.m. This was the 147th spacewalk overall in support of station assembly and maintenance.

The cosmonauts wore their Russian Orlan spacesuits to outfit the new Rassvet module for a Kurs automated rendezvous system capability for future dockings of Russian vehicles arriving at the station to link up to Rassvet. They also routed and mated Command and Data Handling cables on the Zvezda and Zarya modules.

A video camera was removed and replaced on the aft end of Zvezda then successfully tested. The old camera was safely jettisoned away from the International Space Station. The new camera will be used to provide television views of the final approach and docking of future European Automated Transfer Vehicles carrying cargo to the complex.

During the spacewalk, two objects were detected floating away from the station. One was tentatively identified as a cable clamp, left outside the station from a previous Russian spacewalk. That object and another, not conclusively identified, both departed well below the vicinity of the complex and pose no threat to the orbiting laboratory.

This was Kornienko’s first spacewalk and Yurchikhin’s fourth. Yurchikhin’s first three spacewalks occurred when he was commander of Expedition 15 in 2007.