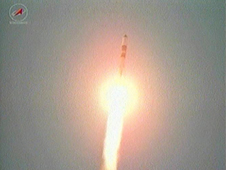 Scheduled to dock with the International Space Station at 12:58 p.m. Friday, the unmanned Progress spaceship is loaded with 1,918 pounds of propellant, 110 pounds of oxygen and air, 220 pounds of water and 2,667 pounds of equipment, spare parts and experiment hardware.

To make room for the ISS Progress 38, the Expedition 24 crew relocated the Soyuz TMA-19 spacecraft to the Rassvet module June 26. With fellow Flight Engineers Doug Wheelock and Shannon Walker aboard, Fyodor Yurchikhin undocked the Soyuz TMA-19 from the aft end of the Zvezda service module, then manually piloted the vehicle to the Rassvet module where it docked successfully. It was the first docking to Rassvet, which was delivered to the station in May on the STS-132 mission of space shuttle Atlantis.

The Progress is similar in appearance and some design elements to the Soyuz spacecraft, which brings crew members to the station, serves as a lifeboat while they are there and returns them to Earth. The aft module, the instrumentation and propulsion module, is nearly identical. But the second of the three Progress sections is a refueling module, and the third, uppermost as the Progress sits on the launch pad, is a cargo module. On the Soyuz, the descent module, where the crew is seated on launch and which returns them to Earth, is the middle module and the third is called the orbital module.
Find this article at:http://www.nasa.gov/mission_pages/station/expeditions/expedition24/p38_launch.html