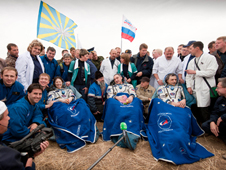 Image above: Expedition 24 Flight Engineers Tracy Caldwell Dyson, left, Commander Alexander Skvortsov, center and Mikhail Kornienko sit in chairs outside the Soyuz Capsule just minutes after they landed near the town of Arkalyk, Kazakhstan on Saturday, Sept. 25, 2010. Russian Cosmonauts Skvortsov and Kornienko and NASA Astronaut Caldwell Dyson, are returning from six months onboard the International Space Station where they served as members of the Expedition 23 and 24 crews. Photo Credit: (NASA/Bill Ingalls)

Skvortsov was at the controls of the spacecraft as it undocked at 10:02 p.m. EDT Friday from the Poisk docking port on the station's Zvezda module, a day later than planned because of a Poisk-side hatch sensor problem Thursday night. That problem prevented hooks on the Poisk side of the docking interface from opening, resulting in a one-day landing delay.

Following undocking and a normal descent, the crew landed at 1:23 a.m. near Arkalyk, Kazakhstan, as the station orbited 220 miles above over the Pacific Ocean off the coast of Japan.

Russian recovery teams were on hand to help the crew exit the Soyuz vehicle and adjust to gravity after 176 days in space. Skvortsov and Kornienko will return to the Gagarin Cosmonaut Training Center in Star City, outside of Moscow. Caldwell Dyson will return to Houston aboard a NASA plane.

The trio launched aboard the Soyuz TMA-18 spacecraft from the Baikonur Cosmodrome in Kazakhstan in April. As members of the Expedition 23 and 24 crews, they spent 174 days on the station. Caldwell Dyson and Expedition 25 Commander Doug Wheelock conducted three spacewalks to replace a faulty cooling pump module on the station’s truss structure. Kornienko conducted one spacewalk to perform assembly work on the Russian segment of the complex.

A new trio of Expedition 25 crew members, NASA’s Scott Kelly, Alexander Kaleri and Oleg Skripochka, will launch from the Baikonur Cosmodrome on Oct. 7, U.S. time and will arrive on the station about 48 hours later.