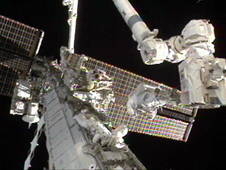 Caldwell Dyson disconnected five electrical and data cables while Wheelock broke torque and removed four bolts from the old pump. The pump module then was extracted from the truss through the use of a grapple bar and installed on a payload bracket on the Mobile Base System on the station’s truss.

With the failed pump module safely stowed on the truss, Caldwell Dyson prepared the spare pump for installation on the next spacewalk targeted for no earlier than Aug. 16. A fourth spacewalk may be required to clean up the work site.

This was the 241st spacewalk conducted by U.S. astronauts, the fifth for Wheelock and the second for Caldwell Dyson. So far, they have spent 15 hours, 29 minutes working on the pump module replacement. It was the 149th in support of International Space Station assembly and maintenance, totaling 937 hours, 4 minutes. It was the 121st spacewalk based out of the space station. Wheelock’s five spacewalks total 36 hours, 10 minutes.

Read about the station's Thermal Control System on page 63 of the "Systems" section of the Reference Guide to the International Space Station. View the entire guide here.
› Back To Top