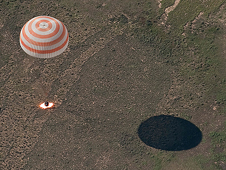 Kotov, the Soyuz commander, was at the controls of the spacecraft as it undocked at 8:04 p.m. EDT from the aft port on the station's Zvezda module. The crew landed at 11:25 p.m., east of Zhezkazgan, Kazakhstan.

Russian recovery teams were on hand to help the crew exit the Soyuz vehicle and adjust to gravity after 163 days in space.

The trio launched aboard the Soyuz TMA-17 spacecraft from the Baikonur Cosmodrome in Kazakhstan on Dec. 21, 2009. As members of the Expedition 22 and 23 crews, they spent 161 days on the station. They supported three space shuttle missions that delivered the U.S. Tranquility module and its cupola; put the finishing touches on U.S. laboratory research facilities; and attached the Russian Rassvet laboratory and storage module.

Kotov has logged 360 total days in space on his two missions, and Creamer has 163 days. Noguchi, who also flew on the STS-114 shuttle mission, has compiled 177 days in space.