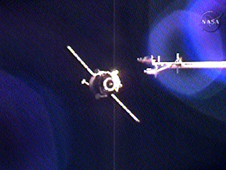 The ISS Progress 36 unpiloted spacecraft docked to the aft port of the Zvezda service module of the International Space Station on Thursday, Feb. 4 at 11:26 p.m. EST using the automated Kurs docking system. The new resupply ship brings to the orbiting laboratory 1,940 pounds of propellant, 106 pounds of oxygen and air, 926 pounds of water and 2,683 pounds of spare parts and supplies for the Expedition 22 crew.

Flight Engineers Maxim Suraev and Oleg Kotov monitored the approach of Progress from Zvezda, along with their crewmates, Expedition Commander Jeff Williams and Flight Engineers Soichi Noguchi and T.J. Creamer.

The spacecraft launched on Tuesday, Feb. 2 at 10:45 p.m. (9:45 a.m. Wednesday, Baikonur time) from the Baikonur Cosmodrome in Kazakhstan.

Once the cargo is unloaded from it, Progress will be filled with trash and station discards. It is scheduled to be undocked from the station in May, and like its predecessors, deorbited and burned in Earth's atmosphere.

Throughout the week, the Expedition 22 crew continued preparations for the arrival of space shuttle Endeavour and the STS-130 crew. During STS-130, the combined shuttle and station crews will work to install the Italian-built Tranquility node and the seven-windowed Cupola. Endeavour is slated to launch Sunday, Feb. 7 at 4:39 a.m. from the Kennedy Space Center in Florida and dock with the station early Tuesday, Feb. 9.