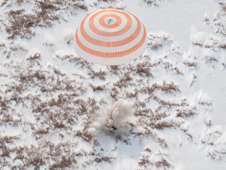 The Soyuz TMA-16 spacecraft is seen as it lands with Expedition 22 Commander Jeff Williams and Flight Engineer Maxim Suraev near the town of Arkalyk, Kazakhstan. Photo Credit: (NASA/Bill Ingalls) 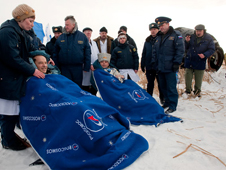 Expedition 22 Commander Jeff Williams and Flight Engineer Max Suraev landed their Soyuz TMA-16 spacecraft on the steppes of Kazakhstan on March 18, 2010, wrapping up a five-and-a-half-month stay aboard the International Space Station.

Suraev, the Soyuz commander, was at the controls of the spacecraft as it undocked at 4:03 a.m. EDT from the station's Poisk module. The duo landed at 7:24 a.m. at a site northeast of the Kazakh town of Arkalyk.

Working in frigid temperatures, Russian recovery teams were on hand at the landing site to help the crew exit the Soyuz vehicle and readjust to gravity. The crew members will return to the Gagarin Cosmonaut Training Center in Star City, outside of Moscow.

Williams and Suraev launched aboard the Soyuz TMA-16 spacecraft from the Baikonur Cosmodrome in Kazakhstan on Sept. 30, 2009. As members of the Expedition 21 and 22 crews, they spent 167 days on the station, presiding over the completion of the complex's U.S. segment.

The astronauts supported two space shuttle flights and helped install the Tranquility module, the cupola viewing port and a second Russian docking module. Scientific research aboard the station continued to ramp up with the increase in available crew time and laboratory facilities.

Williams now has logged 362 total days in space, placing him fourth on the all-time U.S. list of long-duration space travelers. Peggy Whitson, who has spent 377 days in space, tops that list.

The station now is occupied by Expedition 23 Commander Oleg Kotov and Flight Engineers Soichi Noguchi and T.J. Creamer. A new trio of Expedition 23 flight engineers -- Alexander Skvortsov, Tracy Caldwell Dyson and Mikhail Kornienko -- will launch from the Baikonour Cosmodrome on April 2 and join the current station crew with a docking on April 4.