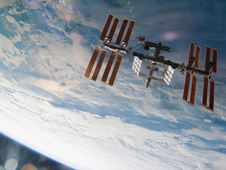 Backdropped by Earth's horizon and the blackness of space, the International Space Station is featured in this image photographed by an STS-130 crew member on space shuttle Endeavour after the station and shuttle began their post-undocking relative separation. Credit: NASA

NASA today officially accepted the “keys” to the International Space Station from its prime contractor, Boeing, at the conclusion of an Acceptance Review Board that verified the delivery, assembly, integration and activation of all hardware and software required by contract.

“The successful completion of this International Space Station contract is a testament to the hard work, dedication and perseverance of an amazing international team of government agencies and their commercial contractors,” said ISS Program Manager Michael Suffredini.

“I want to congratulate the entire Boeing team, including its many suppliers and subcontractors, for their service to NASA and the world,” Suffredini added. “As we near completion of this orbiting laboratory, we are only beginning to understand its true value as the dividends in our investment pay off with advances in medicine, technology and international relations.”

The Acceptance Review Board was an administrative formality that culminated in submission of government form DD 250, in which Boeing confirmed, and NASA accepted, that all major contract requirements have been met. In effect, the DD 250 transfers station ownership to NASA. The ARB examined in exhaustive detail the past and current performance since the first element was launched in 1998.

The review comes on the heels of the STS-130 mission of Endeavour, which delivered the Tranquility module and cupola, the final living areas of the U.S. On-orbit Segment (USOS). The USOS incorporates all contributions to the station by NASA, the Canadian Space Agency, the European Space Agency and the Japan Aerospace Exploration Agency, and interfaces with the Russian On-Orbit Segment, which includes the components provided by the fifth partner, the Russian Federal Space Agency.

Upon completion of assembly later this year, the station’s crew and its U.S., European, Japanese and Russian laboratory facilities will expand the pace of space-based research to unprecedented levels. Nearly 150 experiments are currently under way on the station, and more than 400 experiments have been conducted since research began nine years ago. These experiments already are leading to advances in the fight against food poisoning, new methods for delivering medicine to cancer cells and the development of more capable engines and materials for use on Earth and in space.

For more information about the space station, visit: