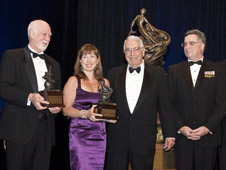 The International Space Station Program received the 2009 Robert J. Collier Trophy "for the design, development and assembly of the of the world’s largest spacecraft, an orbiting laboratory that promises new discoveries for mankind and sets new standards for international cooperation in space." The National Aeronautic Association (NAA) bestows the award annually to recognize the greatest achievement in aeronautics or astronautics in America. The Collier Trophy was formally presented at the Annual Collier Dinner on Thursday, May 13, in Arlington, Va.

"We had a remarkably strong list of candidates, one that visibly impressed the distinguished members of the Collier Trophy Selection Committee," stated NAA Chairman Walter Boyne. "I believe that the International Space Station is a wonderful example of what the Collier Trophy signifies: Accomplishment, vision and advancement in aerospace."

"We are honored to receive this prestigious award,” said Bill Gerstenmaier, associate administrator for NASA's Space Operations Mission Directorate. “We're proud of our past achievements to build and operate the space station, and we're excited about the future- there's a new era ahead of potential groundbreaking scientific research aboard the station."


The International Space Station is a joint project of five space agencies and 15 countries that is nearing completion and will mark the 10th anniversary of a continuous human presence in orbit later this year. The largest and most complicated spacecraft ever built, the space station is an international, technological and political achievement that represents the latest step in humankind’s quest to explore and live in space.

Designated as a national laboratory by Congress in the 2005 NASA Authorization Act, the space station provides a research platform that takes advantage of the microgravity conditions 220 miles above the Earth’s surface across a wide variety of fields, including human life sciences, biological science, human physiology, physical and materials science, and Earth and space science. 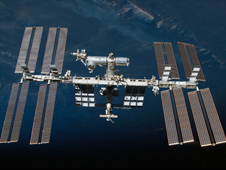 The International Space Station is featured in this image photographed by an STS-130 crew member on space shuttle Endeavour after the station and shuttle began their post-undocking relative separation. Credit: NASA

Upon completion of assembly later this year, the station’s crew and its U.S., European, Japanese and Russian laboratory facilities will expand the pace of space-based research to unprecedented levels. Nearly 150 experiments are currently under way on the station, and more than 400 experiments have been conducted since research began nine years ago. These experiments already are leading to advances in the fight against food poisoning, new methods for delivering medicine to cancer cells and the development of more capable engines and materials for use on Earth and in space.

Now supporting a multicultural crew of six, the station has a mass of almost 800,000 pounds and a habitable volume of more than 12,000 cubic feet – approximately the size of a five-bedroom home, and uses state-of-the-art systems to generate solar electricity, recycle nearly 85 percent of its water and generate much of its own oxygen supply. Nearly 190 humans have visited the space station, which is now supporting its 22nd resident crew.

Boeing is the prime contractor, responsible for design, development, construction and integration of the ISS. 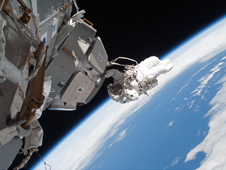 The award will be formally presented to the International Space Station Program team on May 13. The award is named for Robert J. Collier, a publisher who commissioned it in 1910 with the intent to encourage the U.S. aviation community to strive for excellence and achievement in aeronautic development. Past winners include the B-52 Program, the Surveyor Moon Landing Program, the Boeing 747 and the F-22. Other past honorees include the crews of Apollo 11 and Apollo 8, the Mercury 7.

More information can be found at: