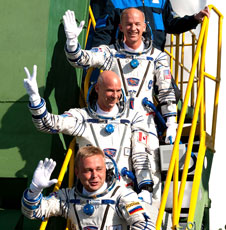 The TMA-16 crew waves farewell from the bottom of the Soyuz launch pad shortly before launch. Photo credit: NASA/Bill Ingalls 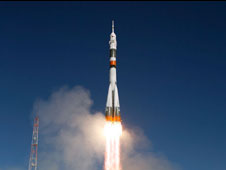 Flight Engineers Jeffrey Williams and Maxim Suraev of the 21st International Space Station crew launched in their Soyuz TMA-16 spacecraft from the Baikonur Cosmodrome in Kazakhstan at 3:14 a.m. EDT Wednesday to begin a six-month stay in space.

Less than 10 minutes after launch their spacecraft reached orbit, and its antennas and solar arrays were deployed shortly afterward.

With Williams, a retired U.S. Army colonel, and Suraev, a colonel in the Russian Air Force, is spaceflight participant Guy Laliberté, flying under an agreement between the Russian Federal Space Agency and Space Adventures, Ltd.

Laliberté will depart the station with Expedition 20 crew members Commander Gennady Padalka and Flight Engineer Michael Barratt in their Soyuz TMA-14 on Oct. 10. Padalka and Barratt launched to the station on March 26.

Williams, 51, is making his third trip to the space station. His first flight was aboard space shuttle Atlantis on the STS-101 mission, which delivered and installed over 5,000 pounds of equipment and supplies to the station in May 2000. In 2006, Williams served a six-month tour of duty aboard the station as an Expedition 13 flight engineer and science officer. Williams has logged over 193 days in space, including over 19 hours in three spacewalks.

Suraev, 37, is making his first flight into space. He is a graduate of the Kachin Air Force Pilot School and the Zhukovski Air Force Academy and received a law degree from the Russian Academy of Civil Service. Qualified as a test-cosmonaut in November 1999, Suraev served as a backup crew member for Expeditions 17 and 19.
› Back To Top