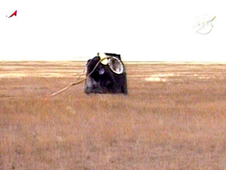 All three crew members were reported to be in good condition. Due to icy conditions at the landing site, the landing support team recalled its helicopters to their bases in Kustanai and Arkalyk, Kazakhstan. Instead the team arrived in all-terrain vehicles from nearby Arkalyk to extract the Expedition 21 crew members from the Soyuz crew module.

Romanenko, De Winne and Thirsk spent 188 days in space, 186 of those aboard the orbiting International Space Station. The three arrived at the station in May as part of Expedition 20, which marked the start of six-person crew operations aboard the station. With their arrival, all five of the international partner agencies – NASA, the Russian Federal Space Agency (Roscosmos), the Japan Aerospace Exploration Agency (JAXA), the European Space Agency (ESA) and the Canadian Space Agency (CSA) – were represented on orbit for the first time.

Romanenko, a cosmonaut with Roscosmos, served as a flight engineer for Expeditions 20 and 21. He was selected as a test-cosmonaut candidate of the Gagarin Cosmonaut Training Center Cosmonaut Office in December 1997. The son of veteran Cosmonaut Yuri Romanenko, he qualified as a test cosmonaut in November 1999.

De Winne, an ESA astronaut, served as a flight engineer for Expeditions 20 and 21 and commander for Expedition 21. He spent nine days aboard the station in 2002 as a member of the Odissea mission arriving on a new spacecraft, the Soyuz TMA-1, then leaving on an older Soyuz TM-34.

Thirsk, a CSA astronaut, served as a flight engineer for Expeditions 20 and 21. In 1996, Thirsk flew as a payload specialist astronaut aboard space shuttle mission STS-78, the Life and Microgravity Spacelab mission.

After traveling back to the Gagarin Cosmonaut Training Center in Star City, Russia, the crew members will be reunited with their families and start their reorientation to a gravity environment after a half year off the planet.

Commander Jeff Williams and Flight Engineer Maxim Suraev remain on the station, comprising the Expedition 22 crew as a two-man contingent for three weeks until the arrival Dec. 23 of Russian cosmonaut Oleg Kotov, NASA’s T.J. Creamer, and Soichi Noguchi of the Japan Aerospace Exploration Agency, who will launch to the station Dec. 20 on the Soyuz TMA-17 craft.