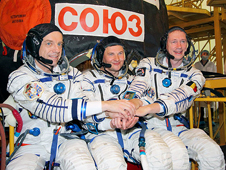 Flight Engineers Roman Romanenko, Frank De Winne and Robert Thirsk of the 20th International Space Station crew launched in their Soyuz TMA-15 from the Baikonur Cosmodrome in Kazakhstan at 6:34 a.m. EDT Wednesday to begin a six-month stay in space.

Expedition 20 will mark the start of six-person crew operations aboard the International Space Station. All five of the international partner agencies – NASA, the Russian Federal Space Agency (Roscosmos), the Japan Aerospace Exploration Agency (JAXA), the European Space Agency (ESA) and the Canadian Space Agency (CSA) – will be represented on orbit for the first time.

Romanenko, a cosmonaut with the Russian Federal Space Agency, will command the crew’s Soyuz spacecraft through launch and docking, and serve as a flight engineer for Expeditions 20 and 21. He was selected as a test-cosmonaut candidate of the Gagarin Cosmonaut Training Center Cosmonaut Office in December 1997. In November 1999, he was qualified as a test cosmonaut.

De Winne, a European Space Agency astronaut, will serve as a flight engineer for Expedition 20 and commander for Expedition 21. De Winne spent nine days aboard the station in 2002 as a member of the Odissea mission.

Thirsk, a Canadian Space Agency astronaut, will serve as a flight engineer for Expeditions 20 and 21. In 1996, Thirsk flew as a payload specialist astronaut aboard space shuttle mission STS-78, the Life and Microgravity Spacelab mission.

Expedition 20 crew members will be welcomed by the Expedition 19 crew, Commander Gennady Padalka and Flight Engineers Michael Barratt and Koichi Wakata, after their docking to the orbiting laboratory, scheduled for May 29.

Padalka, a colonel in the Russian Air Force, also will command the Expedition 20 mission and serve as Soyuz commander. He previously served as commander of Expedition 9 in 2004. During Padalka's first stay at the International Space Station, he performed four spacewalks.

Barratt also will serve as a flight engineer for Expedition 20. He served as lead crew surgeon for the first Expedition crew to the station from July 1998 until he was selected as an astronaut candidate.