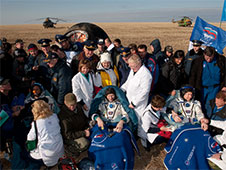 Padalka and Barratt stayed aboard the orbiting laboratory for 197 days. The duo arrived at the station in March to begin Expedition 19 then transitioned to the six-member Expedition 20 crew in May. Padalka commanded both Expedition crews. Laliberte launched September 30 with the Expedition 21 crew and spent nine days on the station.

The three were scheduled to fly back to the Gagarin Cosmonaut Training Center in Star City, Russia outside Moscow early Sunday for reunions with their families, and for Padalka and Barratt, the start of their reorientation to a gravity environment after a half year off the planet.
› Back To Top