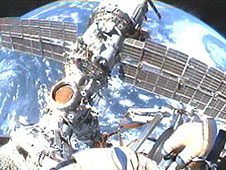 Image above: A spacewalker attached to the Russian Strela crane rises above the International Space Station. Credit: NASA TV

International Space Station Commander Gennady Padalka and Flight Engineer Mike Barratt completed a 4-hour, 54 minute spacewalk at 8:46 a.m. EDT Friday to prepare the Zvezda service module for the arrival of a new Russian module. The spacewalk was the seventh for Padalka and the first for Barratt.

The spacewalkers installed docking antennas, a docking target and electrical connectors for the Kurs automated rendezvous equipment. Barratt then rode on the end of the Strela boom, a manually operated crane, to take photographs of the antennas.

This outfitting of gear was in preparation for the arrival of the Russian Mini-Research Module-2, or MRM2, later this year. The MRM2 will dock automatically to the zenith port of Zvezda and will serve as an additional docking port for Russian vehicles.

The start of the spacewalk was delayed to 3:52 a.m. as Russian ground teams analyzed data from the Russian Orlan spacesuits that showed slightly high levels of carbon dioxide. The spacewalkers said they felt fine.

A second "internal" spacewalk by Padalka and Barratt was conducted June 10 to reposition an internal docking mechanism in the Zvezda service module for the arrival of the MRM2.
› Back To Top