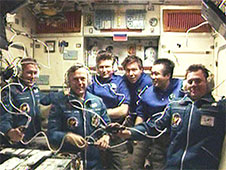 Hatches between the two spacecraft were opened at 10:14 a.m. A welcome ceremony and a safety briefing for the new arrivals followed.

The new crew launched from the Baikonur Cosmodrome in Kazakhstan at 6:34 a.m. Wednesday to begin a six-month stay in space.

Expedition 20 will mark the start of six-person crew operations aboard the International Space Station. All five of the international partner agencies – NASA, the Russian Federal Space Agency (Roscosmos), the Japan Aerospace Exploration Agency (JAXA), the European Space Agency (ESA) and the Canadian Space Agency (CSA) – will be represented on orbit for the first time.

Romanenko, a cosmonaut with Roscosmos, will serve as a flight engineer for Expeditions 20 and 21. He was selected as a test-cosmonaut candidate of the Gagarin Cosmonaut Training Center Cosmonaut Office in December 1997. The son of veteran Cosmonaut Yuri Romanenko, he qualified as a test cosmonaut in November 1999.

De Winne, an ESA astronaut, will serve as a flight engineer for Expedition 20 and commander for Expedition 21. De Winne spent nine days aboard the station in 2002 as a member of the Odissea mission arriving on a new spacecraft, the Soyuz TMA-1, then leaving on an older Soyuz TM-34. 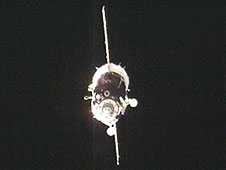 Thirsk, a CSA astronaut, will serve as a flight engineer for Expeditions 20 and 21. In 1996, Thirsk flew as a payload specialist astronaut aboard space shuttle mission STS-78, the Life and Microgravity Spacelab mission.

Padalka, a colonel in the Russian Air Force, also will command the Expedition 20 mission and serve as Soyuz commander. He previously served as commander of Expedition 9 in 2004. During Padalka's first stay at the International Space Station, he performed four spacewalks.

Barratt also will serve as a flight engineer for Expedition 20. He served as lead crew surgeon for the first Expedition crew to the station from July 1998 until he was selected as an astronaut candidate.