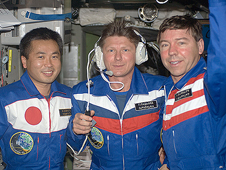 The Expedition 19 crew, Commander Gennady Padalka (center), Flight Engineer Michael Barratt (right) and Flight Engineer Koichi Wakata, is the first to use all of the newly installed environmental, life support and habitability equipment on the International Space Station. In this photo, they are communicating with ground controllers from the station's Zvezda service module. Image Credit: NASA

For most folks on Earth, recycling is something we do because we care about our planet and want to preserve the only environment we have to live in. But for the residents of the International Space Station, failure to recycle is not an option.

Earth’s natural life support system supplies the air we breathe, the water we drink and other essential conditions. For people to live in space, however, these functions must be provided by artificial means.

The current crew – Commander Gennady Padalka and Flight Engineers Mike Barratt and Koichi Wakata – is breathing air that used to be water in the station’s atmosphere and testing the system that soon will provide drinking water from processed urine. That’s important, because the station population will be doubling to six people in the near future; recycling will support their life on orbit and full use of the station’s research potential.

The Expedition 19 crew is the first to use all of the newly installed environmental, life support and habitability equipment.

Some of it has been in use for years, such as a Russian oxygen generating system and an American carbon dioxide removal system.

Others are newer, such as an American oxygen generation system installed in 2006 and a water recovery system delivered and installed last year. Another addition, a second toilet, is tied directly into the water recycling system. Testing is still being conducted on the water that’s been recycled from human urine and condensate collection, but scientists on the ground hope to confirm that it is pure enough to drink by the end of April. The first six-person crew begins working together on orbit this summer.

“The space station is currently a three-bedroom, one-bath home,” said STS-126 Commander Chris Ferguson before his crew delivered key components last November. “We’re going to take up a couple of crew quarters and another toilet. We’re going to turn it into a five-bedroom, two-bath home with a real nice gym.” 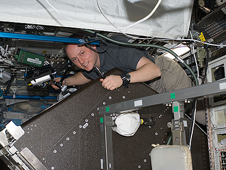 The new Water Recovery System is part of a comprehensive regenerative life support system for the station. The Oxygen Generation System and the Water Recovery System form the core of NASA's Regenerative Environmental Control and Life Support System. These complement Russian systems that supported early station operations and continue their work today.

In addition to recycling the crew’s urine, the new water recycling system also uses water from the station’s atmosphere. On Earth, air conditioners cool the inside of our homes primarily by removing excess humidity from the air. On the station, condensation removal systems keep humidity levels down and send about three liters of reclaimed water to the water recycling gear each day. That water eventually will be consumed by crew members, but for now is used to generate oxygen or to flush the restrooms.

The water is stored on the station in different ways, depending on how it was delivered. Water that gets to the station on Russian Progress cargo ships is kept in tanks, while water that is delivered by shuttles is kept in collapsible bags. The water delivered by shuttles actually is a byproduct of generating electricity for shuttle operations, in which liquid hydrogen and liquid oxygen are combined to produce electricity – and water. Any water being produced currently on the station is stored in bags for consumption later. After it is proven good to drink, water will be available from a dispenser, which can be used to fill drink bags with hot or ambient water, or can be used for daily hygiene purposes.

Each crew member uses about 3.5 liters (0.9 gallons) of water a day. The water recycling system will cut the amount of water that needs to be delivered to the station by about 65 percent. Over the course of a year, it will reduce water deliveries to the station for a six-person crew by 2,850 liters (743 gallons).

Just like on Earth, conservation also plays a key role in the way water is used and recycled on the space station. The chart below compares what the average person on Earth uses as compared to the average space station resident:

Of course, the station needs electricity to run the equipment that performs these recycling operations, and that electricity comes directly from the sun. The space station has four large solar arrays that collect sunlight and convert it into electricity. The final set of solar arrays are part of the Starboard 6 truss that was delivered and installed by the space shuttle Discovery’s crew last month.

The space station’s solar arrays are the largest deployable space assemblies ever built and the most powerful electricity-producing arrays in orbit. The solar cells are mounted to "blankets" that were folded like an accordion for delivery to space and then deployed to full size once in orbit. The cells are made from purified crystal ingots of silicon that directly convert light to electricity for immediate use through a process called photovoltaics. 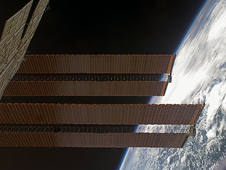 With the latest addition, the station has a total of eight solar array wings converting sunlight into electricity. Each solar array wing is 115 by 38-feet wide and contains a total of 32,800 photovoltaic cells. When fully deployed, each wing covers an area of 32,528 square feet. Each wing is capable of generating nearly 32.8 kW of direct current power. Altogether, the station’s solar arrays can generate up to 120 kilowatts of usable electricity, or enough to power 42 average houses (defined as 2,800 square feet of floor space using 2 kilowatts apiece).

Just like on Earth, photovoltaic cells can generate electricity only when the sun is shining on the solar arrays. For maximum power production, the solar arrays have two sets of joints that let them rotate and track the sun. Just as there are periods of night and day on Earth, there are similar periods on orbit. But since the space station is circling the Earth at 17,500 miles an hour, each “day” and “night” last about 45 minutes. Batteries are used to store the electricity of solar arrays on the Earth, and they’re used on the station, too.

Ultimately, expendable life support equipment is not suitable for long-duration, human missions away from low-Earth orbit because the supply chain is too long. That’s why the recycling equipment being tested and used on the International Space Station is so important to future exploration of our solar system.

On deep space missions in the future, the humans will be so far from home that refilling the water or oxygen tanks won’t be possible, let alone practical for a voyage of months or years. Regenerative life support hardware, which can be used repeatedly to generate and recycle the life sustaining elements required by human travelers, is essential for long-duration trips into space.
› Back To Top