Do You Know Where Your Space Station Is? 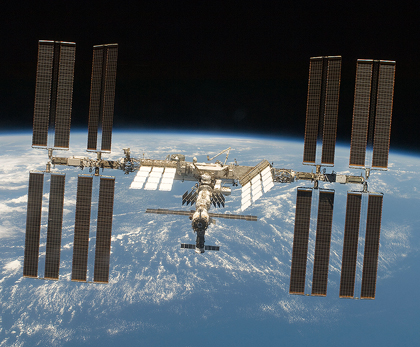 Image above: Backdropped by the blackness of space and Earth's horizon, the International Space Station is seen from Space Shuttle Discovery as the two spacecraft begin their relative separation. Image credit: NASA

Tired of those boring old tracking maps that show the space station going around and around the Earth, and wondering what the view from up there must be like?

Well, what better way to celebrate Earth Day than by taking a look at the Earth below from where the International Space Station is right now? Thanks to the wonders of the World Wide Web (the Internet, that is), real-time tracking data beamed down from the space station and the fabulous catalog of NASA handheld orbital photography -- the Gateway to Astronaut Photography of Earth -- you can do just that!

Here’s how it works: just go to http://external.jsc.nasa.gov/events/issphotos/.

NASA’s web site will check the telemetry from the space station and gather its exact latitude and longitude as it orbits about 200 miles over the Earth, traveling 17,500 miles an hour, making one full orbit every hour and a half. Using that information, the web site will check the extensive collection of images that have been taken from as far back as the Gemini Program, and return to you images of rivers, lakes, mountains, cities, railroads, ports, volcanoes, deserts and islands below.

Since the Earth’s surface is three-quarters water, the web site will draw a virtual “box” around the latitude and longitude found, and expand that box if necessary to find some photos of land masses or islands that are nearby. Though taken at different times and under different sunlight than the current time, the images display the many facets of the Earth.

While this isn’t exactly giving you an opportunity to remotely snap a picture from the space station, it’s the next best thing – and you’ll rarely get a picture of a cloudy day below!

For more information about the International Space Station, which is celebrating its 10th anniversary on orbit this year, visit:

For more information about the imagery and the Crew Earth Observations group at NASA’s Johnson Space Center in Houston, Texas, visit: