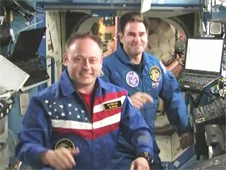 Astronauts in space have been able to vote thanks to a Texas bill passed in 1997.
› Back To Top