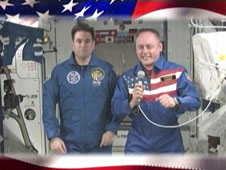 Image above: Commander Mike Fincke (right) and Flight Engineer Greg Chamitoff send a special message from the International Space Station urging all Americans to vote. Credit: NASA TV
+ View video In this day and age, people engage in their right to vote from all over the world. But this Nov. 4, few ballots will have traveled as far as those cast by two NASA astronauts.

Commander Edward Michael Fincke and Flight Engineer and Science Officer Greg Chamitoff are living and working onboard the International Space Station. Though they are 220 miles above Earth and orbiting at 17,500 miles per hour, they will still be able to participate in the upcoming election. A 1997 bill passed by Texas legislators sets up a technical procedure for astronauts -- nearly all of whom live in Houston -- to vote from space.

The astronauts will cast their votes and a secure completed ballot is downlinked and delivered back to the County Clerk’s Office by e-mail to be officially recorded.

To highlight their unique voting situation and to encourage others to exercise their civic duty, Fincke and Chamitoff sent a special message that will air on NASA TV starting Monday, Oct. 27.

Joined by Expedition 18 Flight Engineer Yury Lonchakov, Fincke and Chamitoff also beamed down a message celebrating the upcoming 10th anniversary of the station's launch. The first station piece, the bus-sized Zarya module, was launched from the Baikonur Cosmodrome, Kazakhstan, on Nov. 20, 1998. In the 10 years since, 76 flights have been launched to the complex. The orbiting laboratory has now grown to a mass of almost 600,000 pounds and an inside volume larger than a four-bedroom house.
› Back To Top