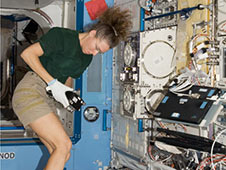 You know, we humans have an amazing ability to adapt. After having been here for several months, the routine up here is so “normal’ to me that I do not even think about the fact that when I get up in the morning, I am in fact, floating up and out of my sleeping bag. I do not contemplate the significance of doing the “Superman fly” down the center of the U.S. Lab to get from one end to the other. The strangeness of being able to “hand” a tool to Mike by just gently pushing it in his general direction never crosses my mind; that is just how life is here.

But every now and then I have a moment where I stop, step back, and look at the big picture and it hits me and I have a “hey, this is NOT normal, this is absolutely weird and amazing and what are you doing here!” kind of moment. That usually gets me started on a line of thought about humans and our desire and compulsion to explore and do new things.

For instance, I was contemplating the other day how the nature of exploration has evolved as humans have gained knowledge and experience. The exploits of Columbus, the first pioneers across the western plains, and the early excursions to the poles came to mind. In each case the people involved were going places no one had been before and doing things that no one, or at least not many, had attempted. In each case they had the most modern equipment and techniques that were available to them and in each case we look back and wonder how they were able to do what they did with such bare-bone primitive means. Columbus had only the most basic of navigational aids. We have GPS. The pioneers set off in covered wagons pulled by horses, and perhaps oxen, to cross unknown miles of harsh landscape. We have rockets that deliver us through the Earth’s atmosphere to the vacuum of space and low Earth orbit in eight and a half minutes. The first Arctic explorers wrapped themselves in furs and wool to survive the incredible cold temperatures of the poles. We have spacesuits for extra-vehicular work that utilizes modern material technology to allow humans to survive temperature swings of 500 degrees and protect against the vacuum of space while at the same time allowing them enough freedom of movement to perform complicated tasks.

As we push the boundaries of exploration further and further, the technology, equipment, and techniques that are required become more and more complex as we develop and test them, use them, and then refine them. The boundaries get pushed more as a result and consequently newer things need to be developed. In the meantime, the previously developed technology gets incorporated into mainstream life. Such is the synergy between the advancement of human knowledge and the evolution of exploration. They drive each other. 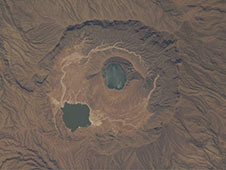 The Deriba Caldera is a geologically young volcanic structure located at the top of the Marra Mountains of western Sudan. Photo Credit: NASA

Here we are flying through the vacuum of space somewhere between 200-250 miles above the Earth in a fancy tin can that embodies the most modern technology that we humans can build today. We get our power from the sun using solar energy and battery storage technology. On Earth solar technology is striving to become a more utilized source of energy. Here it is 100%. It is slowly moving more into the mainstream as some of the implementation problems, not just fundamental technology problems, start to get addressed. We have just installed a system to recycle all waste water aboard the Station, including urine, to make it potable, in effect coming up with a closed loop environmental system. While it is not 100% operational yet, it will be soon. On Earth we have many parts of the world where the access to clean water is a major issue. Perhaps, as we gain knowledge about the operational and logistical characteristics of this new on-board system, someone will find applications that transfer to the water problems on Earth. The list could go on.

Alternatively, in some ways our lives here are quite primitive and draw more parallels with the early explorers mentioned previously. We do not have showers - to get clean (more or less) you take a sponge bath. We do not have a method of washing clothes and tend to wear them until they are ready to be thrown away. We do not have a way to recycle solid waste or garbage and essentially have the equivalent of “throw it over the side of the ship,” since it all gets burned up in the Earth’s atmosphere. For emergency medical care we are dependent on ourselves. We do not have a system for storing food for the long term so all food has to be prepared and shipped with the ability to stay edible over several months or more. (OK, we do have a small fridge that allows us to cool drinks, something that was brought up on the Shuttle, STS-126, with me.)

Interestingly enough, I think that the fact that we now have a small refrigerator up here means that maybe we are not on the frontier now as much as we were before; after all, it is a luxury - the ability to have a cold drink. Does that mean that the frontier is already passing by low Earth orbit and is now at the moon or further? How long into the future will it be before people look back fondly at our “quaint” technology and primitive living conditions and wonder also “how could they have done that?!" I hope soon, since it will mean that we are advancing even further and increasing our knowledge at an ever faster rate.
› Back To Top