Grow Text SizeShrink Text Size
Our Amazing Planet – Views From Space
+ View this journal entry as a PDF (3.4 Mb) with all of Sandy's favorite Earth photos

Well, I know I am behind on these entries and I am sorry… We got busy, I got distracted, I had writer’s block—all of the above are in part the reason why. But after thinking about it I decided to return to the subject of our planet mainly because I am spending a lot of time taking photos of it (and I have never been that much interested in photography!).

I have not yet become tired of gazing out the window and watching the world go by and looking for interesting things to capture as memories. Unfortunately, during the week, we are busy and who knows what I miss, but I try to catch up on the weekends. You cannot be everywhere, though…..

I have been taking photos with different lenses ranging from a 17-35 mm to a 180 mm, 400 mm and effectively an 800 mm (the 400 mm with a doubler). I am clearly only a beginner but still have managed to get some interesting shots; at least I enjoy them. I want to share some of them with you and hopefully you can enjoy the beauty of our planet as well.

I do not promise to have all of the information for all of the pictures I am presenting, and in many cases have more questions than answers about what is seen in the images. Having seen so many of the interesting features that exist on our planet, though, I am motivated to go and learn a bit more about them! 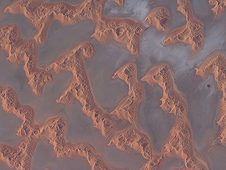 As far as identification of the photos themselves, cataloging is going on as fast as the Earth science people at NASA can get to it. NASA has hundreds of thousands of these kinds of pictures in their files. This is both a good thing and a bad thing! Great because you can go and browse and find beautiful images of all over our planet, taken by astronauts for the last 40 years, and bad because it seems overwhelming to go and find them. It is worth the effort. I apologize in advance for not having all of the detail on location and type of lens but I hope you can just enjoy the photos for the beauty they reveal about our planet…..

The Sahara and Other Deserts

When you think of deserts, and I believe I have mentioned this before, you think of desolate places with no inherent beauty. But I still remember viewing the Sahara Desert the first time during the STS-112 mission. The colors and textures and features of the desert were beautiful. I was determined to capture some of that beauty during my long stay up here. It turns out that many of the desert areas share some of the same features. One of them, that I still don’t understand and must find out more about, are the lines of what look like large sand dunes that extend for hundreds of miles across the desert floor. They may not be dunes but some other geological feature. I do not know. But they are very regular and there are lots of them. How big are they? How did they form? Do they shift around? I look at them and all kinds of questions come to mind. I have tried to show here different magnifications of the lines and features. Also I have tried to illustrate all of the various colors you can see when you cross over these theoretically barren places. Hopefully they will ignite the same awe in you that I experience when I see them. 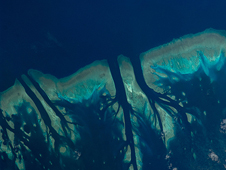 Possibly one of my most favorite things to watch go by and to photograph are the many coral reefs and shallow areas that we have in our oceans. We have so much water on our planet that most of the time when I look out the window I see the deep blue of the oceans sprinkled with white clouds on top. But when we get to areas where the water depth changes due to underwater mountains, coral reefs or other reasons, the deep blue of the ocean gives way to a rainbow of blues and greens that are indescribable. I will let the pictures speak for themselves. I find myself taking picture after picture of these areas just because they are so beautiful. I never get tired of trying to capture these amazing areas and enjoy the photos for the ever changing colors that they exhibit—Mother Earth’s modern art.

You can find these areas along almost any shoreline, but the Bahamas, South Pacific-including Indonesia and, of course, the Great Barrier Reef, and in the mid-East, are the most spectacular examples of color. I will try to identify all of the photos, but as I mentioned before, I do not have all of the location information with me here on orbit. 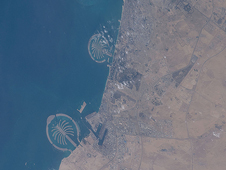 Of course, as we fly over the various continents, we can easily see the imprint of man on the landscape. There are patterns associated with men - the squares, rectangles, and circles associated with agriculture, the random splotches associated with deforestation, the sprawling geometry of cities, straight or windy roads cutting through mountains or across plains. It isn’t necessarily a question of Mother Nature’s natural disorder versus man’s determined march toward order, but the geometry associated with habitation tends to be a bit more defined than that found in the more remote areas. The contrast is interesting to note - both have their beauty; both can blend well together or fight each other and that can occasionally be seen. Like it or dislike it – we are definitely leaving our mark on the surface of the planet!

Why take pictures of clouds, you might wonder? Well, it is not something that I anticipated doing when I first got here. But when I started spending time at the window I started noticing the clouds. It is hard to miss them, actually, since we have so many and they influence when you can take shots or not. 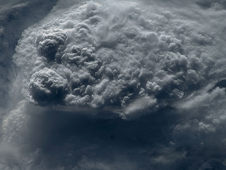 After watching the clouds go by I realized that they kind of have moods. Also like people, no two are alike. There are angry clouds, wispy clouds, clouds that like order, clouds that prefer to be random, clouds that start and end abruptly, clouds that like to display their power and so on and so on. Also, every now and then if you are at the window at the right time near a sunset or a sunrise you can get some beautiful pictures of light reflecting off of the clouds (much like you can see on Earth during a beautiful sunset but, of course, from a different vantage point).

So that is why I ended up taking so many pictures of clouds. I do not know the actual number but I am pretty sure it is more than those poor Earth science people are used to seeing….

I hope you enjoy the clouds. I have tried to show different “moods.” 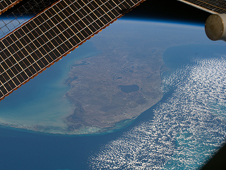 ISS018-E-025225 (31 Jan. 2009) --- The entire Florida peninsula is visible in this image photographed from the International Space Station by an Expedition 18 crew member. Prominent features include the Florida Keys and Everglades in the forefront followed by Lake Okegobee and Cape Canaveral as looking northward (top). A solar panel obstructs viewing of most of the "panhandle" portion (top left) of the state. Photo Credit: NASA
+ View low-res image
+ View high-res image

Of course, one of the special views that we get here on ISS are views of the horizon. Most of the shots that you have seen up to this point were taken from the nadir (down) facing windows in the Service Module. But we also have windows that face port (left) and starboard (right) and through these windows we can get nice views of the horizon. From here you can see more of the “big picture” of the world as it goes by and sometimes capture some dramatic weather or just nice views of our planet. I have illustrated some of these views here.

I am still working on taking pictures at night as cities go by (remember, I am an amateur). Don Pettit, during Expedition 6, probably has taken the best night pictures, so if you want to see some of those I recommend you look up photos from that timeframe. I also have tried to capture a sunset/sunrise sequence but I do not think it can adequately be caught on film (there is always HD video, another project - so much to do, so little time!).

These views are probably the most dramatic…..

I hope I have been able to share a little bit of the magic of our planet. By no means is this an exhaustive presentation of all of the wonders of Earth, it is merely a sample of some of the parts that I find interesting. With time and a bit more education on geology and geography and tons of help from our Earth scientists this could be an much longer presentation. But this will have to do (as especially the time factor is pressing in on me!).

If you did like some of the pictures, spend some time surfing around on the NASA Earth observation Web site. It may take a while to get oriented as there are tons of pictures out there, but the rewards are worth it.
› Back To Top