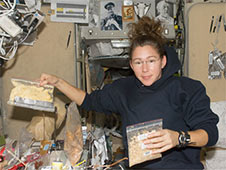 I mentioned before that I am doing some cooking experiments up here and I would like to share some tips with you that I have learned.  Last entry I left you with a question to ponder…how do you cook in space when nothing wants to stay put.  We use gravity in so many ways during our daily lives and do not even realize it, like cooking, for example.  You gather your tools and ingredients and set them out on the counter or table or whatever your work surface is.  You mix things in the bowl, you pour liquids from one place to the other, you throw the dirty dishes in the sink and the food remnants in the trash.  All of this is possible because of gravity—everything stays where you put it.  One of the first challenges I had in my cooking adventures was how to manage all of the above.

It turns out that with duct tape (yep, the ubiquitous duct tape) and plastic bags you can do just about anything.  I have definitely been on a learning curve.  With each successive experiment I am getting less and less messy. (Note I am not saying I am getting more and more clean and orderly, just less messy!)  From day one, when I realized how useful and necessary plastic bags are to the cooking process I have been on the look out for the right size (and cleanliness) of plastic bags.  Fortunately the ground likes to send things up in plastic bags, as they are very useful for containing all kinds of things, and not just for cooking, so we have tons of them here and it was just a matter of sorting through them to find what I was looking for.  I started a stash and whenever we are doing an activity that liberates plastic bags I grab the promising ones and put them in my stash so I have them handy for the next cooking day.

Duct tape is also useful.  You can set it out on the table with the sticky side up and therefore it can help keep things in place. This works for everything from trash to onion and garlic peelings and lemon peel.  It does get messy but you can roll up the used tape with the stuff on it, throw it away, and get out a new strip.

I usually pre-gather all of my ingredients in a large plastic bag and have it Velcroed to the floor by my feet for easy access.  Each food item has an outer packet that has to be cut off and then the inner packet, which is the one actually containing the food, which has to be opened as well.  How this packet gets opened depends on the food. Some of the food comes in outer packages that are foil and we keep those to use as mini-trash bags for the used food packets.  I have saved up a store of the foil bags for use, not only as mini-trash bags, but also as “pots.”  I can put the garlic and onion in here with olive oil and form the bag to the size needed to go in the Russian food warmer.  Hence I end up with cooked onions and garlic (after about 4 hours or so). The foil bags can also be re-filled with the entrée I am cooking, thus enabling me to heat up the dish before we eat it.

To cut things up I use a plastic bag, held down by the duct tape, as a cutting board.  We have a small knife that is sufficient to cut onion and sun-dried tomatoes that have been re-hydrated (although I usually end up simply tearing the tomatoes apart).  The onion I can cut without actually putting into the plastic bag.  I cut the onion in half, putting one on the tape for temporary stowage, and with my hand over the top of the other half, can cut it into big pieces with my hand keeping them from floating away.  I grab the whole handful of pieces and stuff them into a foil bag.  This can get tricky, because depending on how juicy the onion was, the pieces want to stick to my hand.  I simply cannot just “put” them into the bag as there is nothing to make them leave my hand so I kind of have to brush them off of my hand into the bag.  If I make the pieces too small, this is a disaster.  (Not that this has happened or anything…) 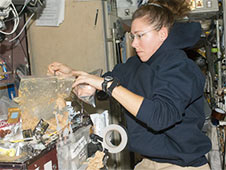 Other things that need to be cut, like the sausages and the tomatoes, I put inside the plastic bag and put my hands inside as well and use the bag to help contain the pieces.  The decision on how big/small of pieces to cut depends greatly on how much moisture is in the food that is being cut.  A little moisture is great because the surface tension of the water will help the food to stick to the bag and stay more or less contained.  One thing I have to be careful of, though, is to not cut too hard such that I rip through the bottom of the bag.  If that happens then the moisture in the bag will seep out onto the tape, the tape loses its adhesion and soon the whole plastic bag wants to float away (not that this has happened or anything…)

I usually have one plastic bag as my main “bowl” and then use others for the cutting or any preparation work.  Also many of my starting foods are standard foods and come in their own pouches or packets.  At some point all of the ingredients have to be removed from their original packaging and end up in the main “bowl.”  This can be accomplished in several ways and again, it depends on the condition of the ingredients.  The easiest thing to do is cut the food packet along one side, and in this case cut the whole bag and do not leave a tab like we usually do (to avoid small pieces of bag floating away…leaving a bag with a tab allows you to only have one piece of garbage to deal with).  Then it is possible to simply turn the bag open side “down” into the plastic bag that is the main bowl and zip the bag closed such that there is no opening.  Then you can squeeze the contents from the one bag to the other.  This method works if there is a bit of liquid in the ingredient and the item does not consist of small chunks.  If the ingredient is in small chunks you just end up squeezing the food to the sides of its bag and nothing empties out into the plastic bag (not that this has happened or anything….).

If it is not possible to squeeze the ingredient out, the next option is to spoon it out.  This will work as long as the food is not too dry.  By the way, scrambled eggs and corn are nightmares to work with as they are small and do not have a lot of liquid inherent in them.  The corn likes to stick to everything, including the spoon, and the eggs are firm believers in entropy (they scatter everywhere!).  I had to play with how to make the cut in the plastic package these foods came in before I was finally able to do this in a not-too-messy of a fashion.   I got around the first issue, the food sticking to the spoon, by placing the spoon deep into the mixing “bowl” and using my hand from the outside to press each side of the plastic bag against the spoon, thus scraping off anything there.  Then it is necessary to very slowly remove the spoon.  To get the eggs to behave I mixed some of the sauce I was using, in the case of the crab salad, mayo, with the eggs while the eggs were still in their original package.  This gave the eggs some cohesiveness and they could be transferred as a lump into the mixing “bowl.”  I actually found that technique to work with any small, dry, loose particles.  Put the sauce with it, and then add them together to the main plastic bag for mixing.

Once all of the ingredients were in the main “mixing bowl” bag I shut the bag, first getting as much of the air out as I could, and then mix by mashing the bag around in my hands.  This is a well-known technique even on the ground so there is nothing new here.  The only thing that I have to be careful about is keeping the bag shut or else I will end up propelling the mixture across the Service Module.  This falls into the category of “bad style points with food.”  (This DID NOT happen, but almost did several times.)

By the way, after each step there is trash to deal with and it must be dealt with at that moment, because there is limited work space and you cannot just “put” it aside for later.  The foil bags served as mini-bags and the empty food packet goes in there before going in the main food trash can.  I usually build up quite a collection of trash bags after every experiment.

The dishes I have made to date have had a high sauce content so they could then be easily eaten or moved around, OR, put on a tortilla.  If the dish needs re-heating, as some do, I put small portions in the foil bags as I mentioned earlier, seal them with duct tape, and put them in the U.S. food warmer, which takes flat pouches as opposed to cans.  Sometimes some liquid escapes in the food warmer and I have to clean that up, but overall it works well.  (For any NASA people reading this, I use disinfectant wipes followed by wet wipes to clean up the food warmer, so no worries!)

So it is possible to cook in space with a few hours, lots of dry and wet wipes and the basic tools of duct tape, plastic bags, foil pouches, and a small knife.  It is fun and certainly an adventure!
› Back To Top