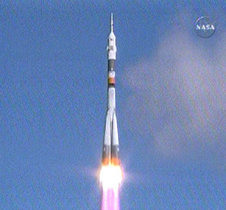 Image above: Expedition 18 launches aboard a Soyuz rocket from Kazakhstan. Credit: NASA TV
Commander Edward Michael "Mike" Fincke and Flight Engineer Yury Valentinovich Lonchakov of the 18th International Space Station crew launched in their Soyuz TMA-13 from the Baikonur Cosmodrome in Kazakhstan at 3:01 a.m. EDT Sunday to begin a six-month stay in space.

Less than 10 minutes after launch their spacecraft reached orbit, and its antennas and solar arrays were deployed shortly afterward.

With Fincke, an Air Force colonel, and Lonchakov, a colonel in the Russian Air Force, is spaceflight participant Richard Garriott, flying under contract with the Russian Federal Space Agency.

Garriott will return to Earth with Expedition 17 crew members, Commander Sergei Volkov and Flight Engineer Oleg Kononenko, in their Soyuz TMA-12 on Oct. 23. Expedition 17 launched to the station April 8.

Expedition 18 crew members will be welcomed by the Expedition 17 crew, including astronaut Gregory E. Chamitoff, after their docking to the orbiting laboratory, scheduled for Tuesday. Chamitoff launched to the station on the STS-124 mission of Discovery May 31. He joined Expedition 17 in progress and will provide Expedition 18 with an experienced flight engineer for the first part of its increment.

Fincke, 41, is making his second long-duration flight on the station. He is a graduate of Massachusetts Institute of Technology and holds master's degrees from Stanford University and the University of Houston, Clear Lake.

He served as an Air Force flight test engineer. He was selected by NASA in 1996. He was commander of the second NASA Extreme Environment Mission Operations (NEEMO 2), working seven days on the seafloor off Florida in May 2002. He served as a flight engineer on station Expedition 9 from April to October 2004.

Lonchakov, 43, is a graduate of the Orenburg Air Force Pilot School and the Zhukovski Air Force Academy. He is a class 1 air force pilot. He has more than 1,400 hours of flight time. He also is a paratroop training instructor with 526 jumps. 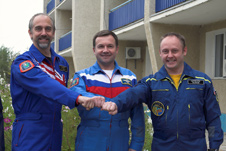 He was selected as a test cosmonaut candidate in late 1997. He has flown two previous space missions, STS-100 to the station in April 2001 and a Soyuz delivery flight to the station in October and November 2002.

Astronaut Sandra H. Magnus is scheduled to fly to the station on STS-126 to replace Chamitoff as a flight engineer on E18. Magnus, 43, will be replaced near the end of Expedition 18 by Japanese astronaut Koichi Wakata, who will launch on Discovery on the STS-119 mission. Magnus holds bachelor's and master's degrees in physics from the University of Missouri-Rolla and a Ph.D. from Georgia Institute of Technology.

She was selected as an astronaut in 1996. Magnus will be making her second spaceflight. She flew as a mission specialist on STS-112 in October 2002.